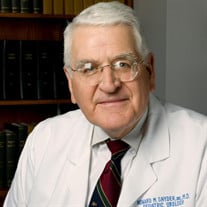 Howard M. Snyder, III, MD Howard Snyder, 76, died on June 4, 2020, at Beaumont in Bryn Mawr from complications of Parkinson’s disease and Covid-19. Prior to his retirement in 2015 due to ill health, Dr. Snyder was a pediatric urologist in the Division of Urology at Children’s Hospital of Philadelphia (CHOP) and Professor of Surgery in Urology at the Perelman School of Medicine at the University of Pennsylvania. Throughout his illustrious medical career spanning more than 50 years, Dr. Snyder’s first focus was on his tiny patients suffering from urological abnormalities at birth. He combined his extraordinary technical skills in corrective surgery with warmth and reassurance for his patients and their families. Dr. Snyder was also dedicated to training and inspiring future generations of surgeons. At CHOP he helped launch the careers of 120 residents in urology. In addition, he lectured and served as visiting professor throughout the world, traveling to 19 countries on 5 continents. In 2014 he was awarded the Pediatric Urology Medal by the American Association of Pediatrics. Dr. Snyder was born in Carlisle, PA, in 1943. Both his father and grandfather were Army Generals, and his grandfather was President Dwight Eisenhower’s personal physician in the White House. His early boyhood was spent in Texas where his father was deputy commander of the Second Armored Division at Fort Hood. Dr. Snyder attended St. Andrew’s School in Middletown, DE, and graduated from Princeton University in 1965. He graduated from Harvard Medical School and received post-graduate training in Boston, London and Liverpool. He was Board certified in Adult and Pediatric General Surgery and Adult and Pediatric Urology. Dr. Snyder served in the Army Medical Corps on active duty until 1978 and in the Active Reserves until 2004, retiring as Colonel after being deployed to active duty for Operation Iraqi Freedom in 2003. Dr. Snyder greatly enjoyed his involvement in The Rabbit (a men’s eating club), The Philadelphia Club, The Merion Cricket Club, and the Spouting Rock Beach Association (Newport, RI). He was an enthusiastic traveler and collector of antiques, particularly clocks. He was an active member of the Church of the Redeemer, Bryn Mawr, and served as a Lay Eucharistic Minister. Beyond all his professional and social honors and affiliations, however, Dr. Snyder drew greatest joy from his family, who gave him their love and devotion throughout his failing health. He is survived by his wife Mimi of Bryn Mawr, his daughter Dr. Emily Queenan and her husband Rick (Ontario, CN), his son Laurence Curtis Snyder and his wife Nicole (Haverford), his son Jonathan Colt Snyder and his wife Ann Marie (Ardmore), his ten grandchildren, and his brother Thomas Snyder (Columbus, GA). The private burial service was held at the Church of the Redeemer. A memorial service will be scheduled at a future date. Donations may be made in his memory to the Urology Program at Children’s Hospital of Philadelphia via online link: bit.ly/drhowardsnyder . Or by check to: Children’s Hospital of Philadelphia (Memo line: Division of Urology in honor of Dr. Howard Snyder) to mailing address: Children’s Hospital of Philadelphia Foundation, P.O. Box 781352, Philadelphia, PA 19178-1352

Howard M. Snyder, III, MD Howard Snyder, 76, died on June 4, 2020, at Beaumont in Bryn Mawr from complications of Parkinson&#8217;s disease and Covid-19. Prior to his retirement in 2015 due to ill health, Dr. Snyder was a pediatric urologist... View Obituary & Service Information

The family of Howard M. Snyder III, M.D. created this Life Tributes page to make it easy to share your memories.

Send flowers to the Snyder family.