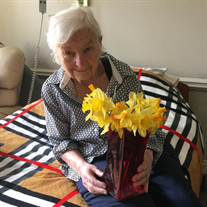 Early Monday morning, December 28th, Ingrid Niemann de Gonzalez passed away at the age of 85 at the Beaumont Retirement Community in Bryn Mawr, Pennsylvania. She died from complications of COVID, anesthesia from surgery, and Parkinson's disease. She fought bravely to stay alive the entire time, just as she had done her entire life. Ingrid was born in a small German railroad town called “Dreileben, Drackenstedt” that once belonged to the former DDR (East Germany), to parents Dorothea and Richard Niemann, and sister Ruth. Although her family and their farm survived World War II, her sister Ruth died tragically from a motorcycle accident soon after. As the Berlin Wall became a reality, Ingrid decided she needed to escape. So, on a cold November evening in 1961 at age 25, she crossed Checkpoint Charlie with a fake passport. She knew she was in the West when she saw an American guard chewing gum. Upon arriving in West Berlin, she encountered the American CIA who wanted to know more about her work as a chemist at the Scientific Institute in East Berlin. Ingrid believed that her continued contact with the CIA during those few years lead to her receiving a green card prior to her voyage to the United States. Ingrid landed in Rochester, NY, with only a few English words, and a suitcase. She was warmly received and taken in by a few lovely American families to whom she maintained contact for the rest of her life. Shortly thereafter, she moved to Philadelphia, PA and met her husband of 48 years, Carlos Gonzalez, a neuroradiologist and neurosurgeon. They happened to sit next to each other at a Rubinstein concert in the Academy of Music in Philadelphia. Carlos was originally from Colombia, South America but had traveled and lived in Europe and could speak German, albeit sparsely. Ingrid invited him for ‘international’ coffee at her apartment with a few of her friends, and the rest, as they say is history. They married on December 22, 1971. Her daughter Stephanie was born in 1972, and Alexandra in 1974. 15 years later, Dr Gonzalez diagnosed her with Parkinson disease. The past 33 years, she has been dealing with her loyal and terrible friend, whom she called 'Mr. Parkinsons'. She was probably the longest living patient with Parkinson's. But she didn't let him win. She just continued on. Ingrid was an incredibly strong and courageous woman. She was also extraordinarily mischievous, funny, super smart, and fearless. She was this blonde bombshell of a woman- and could talk her way out of anything- including smuggling precious coins over the border between East and West Berlin. Her life definitely reads like a novel. Ingrid’s favorite holiday was Christmas. For her family, she created a holiday that was magical, beautiful and sacred. It was a time for reflection, family and love. It is also when she departed this world and took off on her next adventure, riding the waves of the ocean under a beautiful blue and sunny sky. She will be missed by her surviving husband, Carlos Gonzalez, her daughters Stephanie and spouse Mohamed Hijazi and two children Samir and Leila; and her daughter Alexandra and daughter Sabine de Gonzalez. Wir haben Dich super lieb Mutti! (We love you so much). Thank you so much for including us in your crazy adventures and your life and love. You live on in your beautiful grandchildren Sabine, Leila and Samir. Wir werden Dich vermissen (We will miss you), but we know you’re finally dancing and celebrating without pain. Interment is private. In lieu of flowers, donations in Ingrid’s memory may be made to Astral (Advancing Classical Music Emerging Talent: https:// astralartistic.secure.force.com/donate/?dfId=a0n4A00000SCj3lQAD)

Early Monday morning, December 28th, Ingrid Niemann de Gonzalez passed away at the age of 85 at the Beaumont Retirement Community in Bryn Mawr, Pennsylvania. She died from complications of COVID, anesthesia from surgery, and Parkinson's disease.... View Obituary & Service Information

The family of Ingrid Niemann de Gonzalez created this Life Tributes page to make it easy to share your memories.