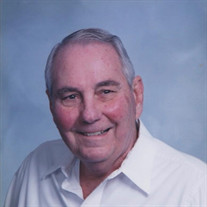 James (Jim) Ernest Buck, of Haverford, PA passed peacefully surrounded by the love of his family at the Quadrangle on November 13, 2018. He was born March 31, 1927 in Moorestown, NJ and grew up in Germantown, PA. In his early years, he was known as Buddy Buck and spent his summers at Beach Haven, where he found his passion racing lightnings: the Buckaroo I, Buckaroo II, and Buckaroo III. He met his beloved wife of 50 years, Dolly, at the Spray Beach Yacht Club. Jim, a member of the Germantown High School class of 1945, graduated early to enlist in the Army Air Corps and served in WWII. He graduated from Temple University in 1953 and spent a 30-year career at IBM in sales and market forecasting. Jim was passionate about serving the community everywhere he lived. He was one of the founding fathers and former president of the Upper Main Line YMCA (Berwyn), former president of the Lake Naomi Club (Pocono Pines, PA), and former president of the Landings Harbor Marina (Savannah, GA). He was an active member of the Lions Club in Stamford, CT, Pocono Pines, and Savannah. For ten years, he volunteered at the Greenbriar Children’s Center (Savannah). Jim was adoredby all for his witty personality, his booming voice and his welcoming heart that always room with love and laughter. He was an avid outdoorsman, enjoying his free time sailing, golfing, skiing, flying, swimming and boating. Jim’s most adventurous endeavor was hosting his grandchildren for a week-long Camp Buckaroo for six summers, following the loss of his wife. He entertained his grandchildren with golf lessons, crafts, swimming, field trips, miniature golf, and canoeing. Jim will be deeply missed by his family, who find peace knowing he is once again united with the love of his life, Dolly. Survived by his four children, Jim (Kathy), Marijane Cummings (George), Ginny Jurgens and Nancy DiSilvestro (Anthony); eleven grandchildren, Diana Funk (Doug), Amanda Burch (Ryan), Ashley DiSilvestro, Christopher Jurgens (Cindy), Kevin DiSilvestro (Jessie) , Jim Buck (Crystal), Matthew Jurgens (Krista), Lacy Cummings, Christy Rivard (Laurent), Tierny, and Conner Cummings; and five great-grandchildren, Victoria and Jeanette Funk, Oakley and Ella Burch, and Luke Buck. Predeceased by his wife Dolores Horine Buck, his parents James Ernest Buck and Mary Cannon Buck, and his three sisters, Harriet, Emily, and Jane. His memorial service will be held on Saturday November 15, at 12:00 pm at St. Luke’s Lutheran Church, 203 N Valley Forge Rd., Devon, PA 19333, with a luncheon to follow. In lieu of flowers, contributions may be made to the American Diabetes Association or the COPD Foundation.

James (Jim) Ernest Buck, of Haverford, PA passed peacefully surrounded by the love of his family at the Quadrangle on November 13, 2018. He was born March 31, 1927 in Moorestown, NJ and grew up in Germantown, PA. In his early years, he was... View Obituary & Service Information

The family of James E. Buck created this Life Tributes page to make it easy to share your memories.

Send flowers to the Buck family.