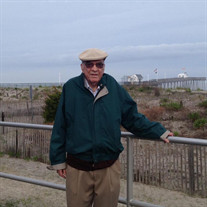 James H. Clark, retired Verizon Manager died on January 23rd, 2018 at age 85 at Bryn Mawr Hospital. He was employed by Bell of Pennsylvania - Bell Atlantic - Verizon manager, was an award winning writer and a community leader. Mr. Clark is survived by his wife Millie (McMonagle); four children: James A. Clark(Linda), Francis J. Clark, MD(Alison), Mary Ann Walsh, (Brian), William H. Clark(Donna), and ten Grandchildren, who affectionately called him PaPa Jim: Brian(Lisa), Matt and Katie Walsh, Jimmy, Shane, Chelsea(Ty DeBoer), Keanan, Andrew, Caroline and Cecilia Clark; 2 great grandchildren and his brother Jerome A. (Nancy). Born in Penn Wynne Pennsylvania in 1932, his family of five moved to North Philadelphia in 1937 after his father's business, the Clark Iron Foundry, failed during the depression. In 1951 living at Eighth and Norris Streets, he graduated from Northeast Catholic High School. In 1952 after moving to Ardmore Pennsylvania, he volunteered for the navy during the Korean War and served four years including thirty-eight months aboard the destroyer, U.S.S. Lloyd Thomas DDE-764. He reached rank of radioman second class and was the lead Radio Petty Officer in charge of the Thomas's communications center (Radio Shack). Honorably discharged in February 1956, Bell of Pennsylvania hired him as a salesman for Philadelphia. He was transferred to the Main Line district, where he met Mildred McMonagle, a Telephone Company Service Representative. They married in 1958 and lived in Overbrook, Pennsylvania. In 1964, they moved to Penn Wynne where they raised four children. His family was the most important part of his life. He cherished his time with his wife, taking day trips, bus tours, cruises, dancing to big bands and the early rock combos, and especially their joint time with their children and grandchildren. He graduated from St. Joseph College Evening Division in 1967 with a Bachelor Degree in Business Administration. From 1957 until 1964 he worked part-time as a bartender at his father-in­ law's tavern, Mack's Grill, located 63rd and Lancaster Ave. in Overbrook. Starting in 1961 with Bell of PA, he received various sales management promotions. From 1970 until retirement in 1988 he was Manager -Sales Operations. He served as liaison between the Telephone Company and Yellow Pages sales agencies, monitoring sales activity. With AT&T break-up in 1984 he participated in the organization of Bell Atlantic's (now Verizon) directory department. He retired in 1988 because of medical reasons. After retirement, he began to write as a hobby. In 1988, Mr. Clark was founding member of Writers' Cramp, a Main Line writing critique and support group. He won sixteen Philadelphia Writers Conference's awards, including 2004 first place non-fiction award, 2006 first place memoir award.. Mr. Clark was director, officer and 1973 president of the Penn Wynne Civic Association and served as chairman of the 1976 Penn Wynne Bicentennial Committee. He was selected Penn Wynne citizen of the year in 1974. He led Penn Wynne's Cub Pack #155 and coached community baseball teams where his 3 sons played. A Funeral Mass to celebrate his life will be held at Presentation BVM Church, 240 Haverford Rd., Wynnewood, PA. at 12 noon on Sat. January 27th. The family will receive guests from 10:30 to 11:45 at the Church. Interment will follow at Calvary Cemetery. In lieu of flowers, memorial contributions may be made to St. John's Hospice 1221 Race Street, Philadelphia PA 19107-1694

The family of James H. Clark created this Life Tributes page to make it easy to share your memories.

Send flowers to the Clark family.