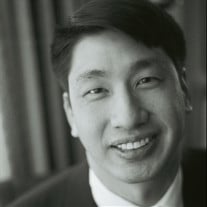 James Kan-Chao Foo, 47, died August 10, 2019 at the Hospital of the University of Pennsylvania, due to complications from amyotrophic lateral sclerosis (ALS). He was a beloved son, brother, husband, father, and friend. Jim was born April 23, 1972 in Tallahassee, Florida, the second son of E-Hsin and Susanna Foo. He spent his early childhood in Indiana, where his father worked as an engineer. The family moved to Philadelphia in 1979 when Susanna and E-Hsin were invited to join Jim’s paternal grandparents in their restaurant business. Jim and his brother Gabe occasionally rode in the family station wagon on morning trips to shop for ingredients, and as teenagers they spent weekends helping in the restaurant. In 1987, their parents opened a new restaurant on Walnut Street, where Susanna won accolades as one of the country’s best chefs. Jim attended elementary school at Friends Select in Philadelphia and transferred to The Haverford School in seventh grade. He excelled academically during his six years at Haverford and captained the track team in his senior year, regularly placing first in the high hurdles and triple jump. After his high school graduation in 1990, Jim moved to California to attend Stanford University, where he earned a bachelor’s degree in economics in 1994. He received his M.B.A. in finance from New York University in 2002. Following business school, Jim accepted a job at Ernst & Young in San Francisco. Soon after he was introduced to Elizabeth Chow, a New York native who had studied at Cornell and Wharton. Jim and Liz had much in common—both tall, both Chinese-American, both educated at top universities—but they quickly felt a connection far beyond the traits they shared. When Jim was offered a position at Bryn Mawr Capital Management in 2003, Liz moved with him to Philadelphia and took a job nearby. They planned a future together in the Delaware Valley but remained fond of the Bay Area, choosing San Francisco’s Asian Art Museum as the site of their wedding in 2005. Jim worked for twelve years as a portfolio manager at Bryn Mawr Capital, routinely rising before dawn to trade on European equity markets. In 2017, Jim and a colleague formed their own investment firm, Tournus Capital Partners. Among Jim’s varied personal interests—world travel, collecting fine wines, the films of Alfred Hitchcock—his passion for sports was particularly strong. A longtime fan of Philadelphia’s pro teams, he was in the stadium to witness a World Series victory by the Phillies and a Superbowl championship by the Eagles. He was also an avid supporter of Stanford athletics, following the Cardinal basketball team to San Antonio when they reached the Final Four. Although he was dedicated to his work and enthusiastic in his hobbies, Jim’s deepest devotion was reserved for Liz, their daughters Cassie (born 2006) and Vivi (2008), and their son Kent (2010). Whether cheering at a swim meet, vacationing on Sea Island, or watching movies under a blanket on the couch, Jim was happiest spending time with Liz and their children. He also enjoyed a lifelong bond with his cousins, who joined him to celebrate special occasions even when they lived thousands of miles apart. Jim was diagnosed with ALS in November 2015. Several years later, he reflected on his experience with the illness: “One important thing that I have gained as a result of this devastating diagnosis is a new perspective on life and what is truly important. I am in great spirits and will not let this disease defeat me because my family and friends are too important for me to give up. ALS may take away my body but it will not take away my will or my spirit.” At the 2018 Walk to Defeat ALS in Philadelphia and in Silicon Valley, Jim and Liz raised a combined amount of $115,000—just one example of Jim’s importance in the lives of his family and friends. Jim rarely sought attention, either before or after his diagnosis, but those who met him were taken with his gentle warmth and contagious good cheer. Effortlessly funny, he could make others laugh by saying almost anything—or, just as often, by staring stone-faced. Jim made lasting friendships with people from every part of his life, including classmates from grade school to graduate school, neighbors in Center City and the suburbs, associates at work, caregivers at home, parents of his children’s friends, and numerous others. Innumerable friends considered him their best friend; he made everyone feel that way. A cousin once observed succinctly: “Nobody doesn’t like Jim.” Jim’s father, E-Hsin, died in 2010. Jim is survived by his mother Susanna, his brother Gabriel, his wife Elizabeth, and their children Cassandra, Vivienne, and Kent. Visitation will take place at Chadwick & McKinney Funeral Home, 30 East Athens Avenue, Ardmore, PA 19003, on Tuesday, August 13th, 6-8 pm and Wednesday, 9-11 am, followed by a private burial on Wednesday. All are welcome to join a celebration of Jim’s life at the Merion Cricket Club, 325 Montgomery Ave, Haverford, PA 19041, on Sunday, August 18th at 2 pm. In lieu of flowers, please consider making a donation to the ALS Association Greater Philadelphia Chapter, 321 Norristown Rd # 260, Ambler, PA 19002 or Penn Medicine’s NeuroIntensive Care Unit Gift Fund. For donations to Penn, please make checks payable to the Trustees of the University of Pennsylvania and mail them to Penn Medicine Development, Attn: Lindsey Walker, 3535 Market Street, Suite 750, Philadelphia, PA 19104. You can also make a secure gift online at pennmedicine.org/neurointensivecareunitgiftfund.

James Kan-Chao Foo, 47, died August 10, 2019 at the Hospital of the University of Pennsylvania, due to complications from amyotrophic lateral sclerosis (ALS). He was a beloved son, brother, husband, father, and friend. Jim was born April... View Obituary & Service Information

The family of James Kan-Chao Foo created this Life Tributes page to make it easy to share your memories.

Send flowers to the Foo family.