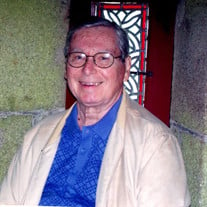 On August 15, 2018, James Duncan Ingles fell asleep in Christ at age 86, of Ardmore, formerly a resident of Center City. As a social worker, pastor, and church organist, his compassion and caring were always welcomed, and his great spirit and wisdom will long be remembered. He holds a BA from Haverford College, MSW from Bryn Mawr College in social work and MTS from Seabury-Western Theological Seminary in Evanston, Illinois. He was Mental Health-Mental Retardation Administrator of Carbon and Lehigh Counties and Director of Social Services at the Philadelphia Protestant Home, The Evergreens in Moorestown, NJ, and the Sacred Heart Home for Incurable Cancer in North Philadelphia which provides free care for cancer patients (begun by Nathaniel Hawthorne’s daughter Rose). “Father Jim” served in the Episcopal Priesthood for 15 years, including 7 years at St. David’s Episcopal Church in Manayunk. He maintained a private counselling practice in Center City. For the conclusion of his ministry, he provided pastoral care for sick and elderly members of the Ardmore United Methodist Church where he and his wife Elizabeth Boggs, the Director of Music, became members. As a very gifted organist from his teenage years, he played for many large churches in Maine, New York City, New Jersey and the Philadelphia area, including the Cathedral of Saints Peter and Paul, St. Francis de Sales and the First Baptist Church, becoming an outstanding substitute for the American Guild of Organists. He was a lifelong advocate for peace and for racial equality, notably at the Church of the Advocate and in Evanston, Illinois. James Duncan Ingles was predeceased by his siblings Pat Ingles Watson and Bruce Ingles, his parents Priscilla Miles Ingles and J. Wesley Ingles, his first wife Faith, and a grandson William. He is survived by his loving wife Elizabeth, three sons from his first marriage: Walter, Peter, and Christopher; and five grandchildren plus several great-grandchildren. A service of remembrance and thanksgiving will be held at the Ardmore Methodist Church at 11:00AM on Saturday, September 22, followed by interment in the Church Memorial Garden and a light luncheon. In lieu of flowers, donations in his memory may be made to Ardmore United Methodist Church, in memo, for benefit of the music ministry.

On August 15, 2018, James Duncan Ingles fell asleep in Christ at age 86, of Ardmore, formerly a resident of Center City. As a social worker, pastor, and church organist, his compassion and caring were always welcomed, and his great spirit and... View Obituary & Service Information

The family of James Duncan Ingles created this Life Tributes page to make it easy to share your memories.

Send flowers to the Ingles family.