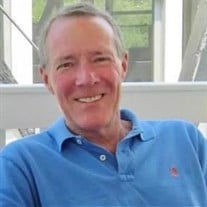 James Knox McAdam, 73, passed away on December 25, 2019 after a courageous battle with cancer. Beloved husband of Josselyn and loving father of Gregory (Allison) of Walnut Creek, California and Mary (John) of Chatham, New Jersey, Jim was the cherished “Pop” to grandsons Joe, Jake, Will, Danny and Jimmy. He is also survived by his brother Bill McAdam and sister Elle Stephens. Jim’s greatest joy was spending time with his family. Born on October 19, 1946 in Los Angeles, California to William and Janet McAdam, Jim attended Harvard School and North Hollywood High School and then matriculated to the University of California, Berkeley. Go Bears! He received his MBA from the University of Southern California. After college, Jim enlisted in the U.S. Army and was stationed in the Department of Intelligence. He then followed in his father’s footsteps and began a career in commercial real estate working for shopping center development firms, including The Hahn Company and Homart Development. Jim spent nearly the first 50 years of his life in Los Angeles, where he was a long-time member at Los Angeles Country Club and The Beach Club. Jim and Josselyn were married in 1971 but their lives were always intertwined. They were born weeks apart at the same hospital and delivered by the same doctor. They were also both members of the class of 1968 at Berkeley. In 1995, Jim and Josselyn moved to Bryn Mawr, Pennsylvania where Jim took a job with Kravco as a real estate asset manager before starting his own real estate asset management firm, Charter Oak. He and Josselyn loved the Main Line and formed many new friendships through his work, Church of The Redeemer, Merion Golf Club and Merion Cricket Club. Jim also loved his 6:10 a.m. running group where he found a new passion for triathlons. Some of Jim’s proudest accomplishments were completing five marathons as well as an Ironman triathlon at the age of 61. Jim was known for being deeply loyal, hardworking, thoughtful, meticulous, and generous to everyone he met. He had a passion for running, barbecuing with family, skiing, and spending time with good friends. He was a devoted husband, father, grandfather and friend to all that knew him. He always put his family first and will be dearly missed by all who knew him. In lieu of flowers, contributions may be made in his memory to St. Jude Children’s Research Hospital. https://www.stjude.org/donate/ A Memorial Service will be held Saturday, January 4th at Church of the Redeemer, 230 Pennswood Road, Bryn Mawr, Pennsylvania at 10 a.m.

James Knox McAdam, 73, passed away on December 25, 2019 after a courageous battle with cancer. Beloved husband of Josselyn and loving father of Gregory (Allison) of Walnut Creek, California and Mary (John) of Chatham, New Jersey, Jim was the... View Obituary & Service Information

The family of James K. McAdam created this Life Tributes page to make it easy to share your memories.

Send flowers to the McAdam family.