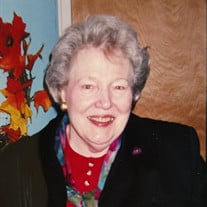 Jane Ann Brown of Philadelphia, Pennsylvania, &#8220;A bright and loving light for all who knew her!&#8221; Died Saturday, February 24, 2018 in Philadelphia at the age of 84. Services will be private. Survived by her Daughter, Glenys Y. Eldred... View Obituary & Service Information

The family of Jane A. Brown created this Life Tributes page to make it easy to share your memories.

Jane Ann Brown of Philadelphia, Pennsylvania,
“A bright and loving...

Send flowers to the Brown family.