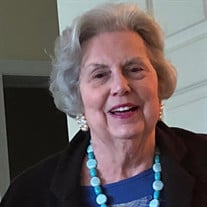 Janet Spencer Dougherty died on Thursday, April 9, 2020 in West Chester, PA at the age of 78. She was a beloved wife, mother, grandmother, sister, and friend. Janet was born on 8/26/1941 in Providence, RI to Samuel Spencer and Dora White Spencer. She was raised in Washington, DC and graduated from Concord Academy. She attended American University and Georgetown University and studied abroad for a year at The Sorbonne in Paris where she learned to speak French fluently. She married A. Webster Dougherty, Jr. of Philadelphia on May 2, 1964. They were married for 52 years and raised 3 daughters, Jennifer, Cynthia, and Andrea. She described being a mother as the greatest joy of her life and her most important accomplishment. She was an avid patron of the arts and active volunteer for The University of Pennsylvania Museum of Archaeology and Anthropology, working for many years as a committee member and Chair of The Women’s Committee and as a Mobile Guide bringing museum exhibits to local schools. She was a patron and long-time active volunteer for the Philadelphia Orchestra as well. She loved travel and opera and art museums, The Philadelphia Flower Show and local garden tours. She had countless friends and lit up every room she entered with her cheery countenance and warm, genuine enthusiasm for people and life. She and her family spent summers at the family home in Narragansett, RI and had a beloved community of lifelong friends at The Dunes Club. She was also a member of the Merion Cricket Club and The Acorn Club. Janet was preceded in death by her parents, Sam and Dora, and by her husband, Webster. She is survived by her daughters, Jennifer Lenihan (Sean), Cynthia Dougherty, and Andrea Dougherty (TC Rogers) and her two grandchildren, Patrick Lenihan and Sam Dougherty-Rogers, her brothers, Richard Spencer (Alice) and Henry Spencer (Nicky Cass) and many nieces and nephews. In the last few years of her life, she was blessed to have the companionship of Harold Davis who brought her great comfort and joy. Due to the national health crisis, a memorial service will be held at a later date when it can be done safely at The Church of The Redeemer in Bryn Mawr, PA. Please refer to ChadwickMcKinney.com for service updates. In lieu of flowers, contributions in her memory may be made to The Alzheimer’s Association, Philadelphia branch or an appropriate charity for Covid-19 healthcare workers.

Janet Spencer Dougherty died on Thursday, April 9, 2020 in West Chester, PA at the age of 78. She was a beloved wife, mother, grandmother, sister, and friend. Janet was born on 8/26/1941 in Providence, RI to Samuel Spencer and Dora White Spencer.... View Obituary & Service Information

The family of Janet S. Dougherty created this Life Tributes page to make it easy to share your memories.

Send flowers to the Dougherty family.