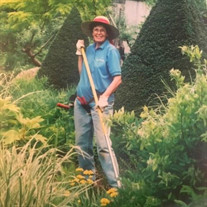 Janet Taylor Hall of Newtown Square, Pennsylvania, passed away peacefully at home on August 5, 2020. She was born on June 19, 1937, in Providence, Rhode Island. She was the only child of Robert Palmer and Dorothy Sylvia Taylor. Janet spent most of her happy childhood on Glendower Road in Roslindale, Massachusetts, and later in West Roxbury. She fondly recollected sledding on snowy winter days with neighborhood friends. Much of Janet's joy in adolescence was drawn from active involvement in her church, visiting with family and friends, and singing by the piano with her parents on Saturday evenings. She graduated from Roslindale High School in 1955, where she enjoyed being on the swim team and was planning on a nursing career. Janet met her future husband, David H. Hall, while she was a secretary at John Hancock Insurance in Boston. They were married in 1957 and raised their family in Ardmore, Pennsylvania where Janet formed many life-long friendships. She and her family attended St. Mary's Episcopal Church in Ardmore where she was a longtime member. Janet is survived by two sons, David Endicott Hall (Heidi) in Lewisburg, Pennsylvania, and Stephen Taylor Hall (Lisa) Boulder, Colorado. In addition, she was the proud grandmother of Tasha, Lydia (Leigh), Agatha, Tucker and Dylan. Also, adding to her joy were four great-grandchildren, Isa, Edgar, Luca, and Abraham. She was predeceased by her youngest son, Jonathan, in 2013 and former husband, David, in 2011. Janet lived her life with love for her family - children, grandchildren, and great-grandchildren, and many friends. She found pleasure in gardening, attending musical concerts, and caring for many pets over the years. Along with her former husband, Janet had a great interest in local neighborhood issues and public school activities. For many years, she enjoyed spending summers in Vermont with her children. Janet volunteered at the annual Philadelphia Flower Show and the Kimmel Center for years. Additionally, she spent many happy hours gardening at The Chanticleer Estate in Wayne, Pennsylvania. There are no plans for a memorial service at this time due to COVID, but there will be future memorial services in the Philadelphia and Boston areas. Condolences and remembrances may be left at www.chadwickmckinney.com.

Janet Taylor Hall of Newtown Square, Pennsylvania, passed away peacefully at home on August 5, 2020. She was born on June 19, 1937, in Providence, Rhode Island. She was the only child of Robert Palmer and Dorothy Sylvia Taylor. Janet spent... View Obituary & Service Information

The family of Janet Taylor Hall created this Life Tributes page to make it easy to share your memories.

Send flowers to the Hall family.