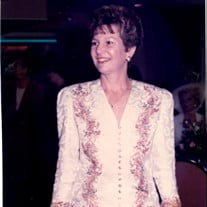 Janet F. Swanson, 81, passed away on Saturday, February 9, 2019, in Newtown Square, PA, surrounded by her loving husband, Roger Swanson, and her beloved children. Janet was born in 1937 in Boston, MA, the oldest of three daughters of Dick and Midge Fisher. She grew up in Winchester, MA, and raised her family, with Roger, in Mountainside, NJ. Janet and her husband, Roger, celebrated 58 years of marriage together, enjoying an avid love of golf (with two holes-in-one!), travel, and time at her favorite getaways at Hemlock Farms and Wingaersheek Beach. She excelled at being a mom and “Grammie’ to her four children and ten grandchildren, offering her quiet patience and sunny optimism to their lives. She was devoted to her family first, then her friends, volunteer work and church activities. Janet enjoyed flowers, from her ever present garden to her small floral design business, Baskets and Bows. Her community activities were numerous, from volunteering at The Children’s Specialized Hospital in NJ to her TWIG fund-raising events to her involvement at the Mountainside Presbyterian Church where ever needed. Her creativity was abundant through painting, needlepoint, and her love of decorating and design, most notably in the home she and Roger built in Warren, NJ. Janet is survived by her daughter and son-in-law Cheri and Brad Paulsen of Cheshire, CT; her son and daughter-in-law Martin and Susan Swanson of Paoli, PA; her daughter and son-in-law Sandie and Kevin Nicholson of Berwyn, PA; and her daughter and son-in-law Kim and Mark Kramer of Frisco, CO. Also surviving Janet are her cherished grandchildren, Kate Paulsen, Jennie Paulsen, Ryan Swanson, Brittany Swanson, Will Swanson, Patrick Nicholson, Sarah Nicholson, Kyle Nicholson, Annika Kramer and Sam Kramer. She is also survived by her sisters, Carol Crabtree and Sara Fisher. Family and friends are invited to join the Swanson family to celebrate Janet’s life at a memorial service at the chapel at Bryn Mawr Presbyterian Church on Saturday, February 23rd at 11 AM. A reception will follow at the church. Interment will be private at the Wildwood Cemetery in Winchester, MA. In lieu of flowers, the family asks that donations can be made to Alzheimer’s Association at www.alz.org. in Janet’s memory.

Janet F. Swanson, 81, passed away on Saturday, February 9, 2019, in Newtown Square, PA, surrounded by her loving husband, Roger Swanson, and her beloved children. Janet was born in 1937 in Boston, MA, the oldest of three daughters of Dick and... View Obituary & Service Information

The family of Janet F. Swanson created this Life Tributes page to make it easy to share your memories.

Send flowers to the Swanson family.