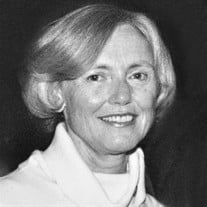 Jean Satterwhite Harper of Gladwyne, PA: January 25, 2020, at Waverly Heights age 98. Born October 30, 1921 in Atlanta, GA, daughter of Randall and Peachey (Henley) Satterwhite. Jean attended Agnes Scott College and The Eastman School of Music. She married William Z. Harper in October 1945 in Rochester, NY, where she resided nearly all her life, until moving to Gladwyne in 2015 to be closer to her children, grand- and great-grandchildren. She was a founder of the Brighton Jr. Chapter of the YWCA, volunteered for the Rochester Museum of Science, the Rochester General Hospital, and was a member of the Chatterbox Club and Monroe Golf Club. She was a long-time member of 12 Corners Presbyterian Church, and she attended the First Baptist Church of Rochester. Mrs. Harper was pre-deceased by her husband, Bill, of 67 years, a brother, Randall, and a son, W. Todd. She is survived by her brother Fletcher H. Satterwhite (Alissande) of Murrieta, CA, her son, Gregory (Lorraine Prince) of Narberth, PA, a daughter Kristin (Bonnie Dawkins) of Oyster Bay, NY; two grandchildren, Jessica Todd Harper (Christopher Zafiriou) and Rebecca Winfield (Zachary), both of Merion Station, PA; 5 great grandchildren, Nicholas, Marshall and Catherine Zafiriou; June and Henry Winfield, nephews Randall, Stephen, Ross, and Todd Satterwhite, and a niece Judith Kimmerer. Services will be private. Donations may be made to the William Todd Harper fund of the Brighton Education Fund at the Rochester Area Community Foundation, 500 East Avenue, Rochester, New York 14607-1912.

The family of Jean S. Harper created this Life Tributes page to make it easy to share your memories.

Send flowers to the Harper family.