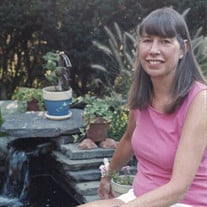 Jill Berguido Gill, 76, of Haverford died Wednesday morning, 10 November, 2021, sitting up in her big comfortable chair in the bedroom of the house in which she lived for 37 years with her loving and devoted husband, Bruce Cooper Gill, and where she raised her loving son, Timothy Clement. Jill died quietly from complications of Alzheimer’s disease with which she had struggled for better than six years, and which were exacerbated by chemotherapy treatments she received for a breast cancer diagnosis in January 2015. Unable to finally stand, walk, eat, swallow, or talk, Jill could still squeeze your hand as though she at least partly understood what was being said to her. She opened her big brown eyes and gave us a broad smile while being introduced to her new hospice nurse, after which she simply closed her eyes and went peacefully to sleep, suddenly having no pulse or blood pressure. Jill was born at Lankenau Hospital in Philadelphia on April 24, 1945 to Carlos Berguido, Jr, Esq. and Marion Jayne Berguido, the 5th of six children. She spent most of her life in Lower Merion Township and graduated from the Agnes Irwin School in 1963. She went on to graduate from Sweetbriar College, Virginia, and later earned her Master’s Degree at Temple University in Education in 1975. After “roaming” a bit to California and New York City after college, Jill encountered a teaching position at the Montgomery Country Day School in Wynnewood, where she became a reading specialist. She remained there until the school moved to Chester Springs in the mid-1980’s, at which time she opened her private tutoring and testing practice. She loved working with children and also often taught in the Agnes Irwin summer programs, finally fully retiring from teaching in 2013. Jill retired to driving her friends who could no longer drive themselves, and to her gardens, birdfeeder, fish pool, ducks, chickens, dogs, and other pets. Jill was a bit “footloose” and loved to travel with her girlfriends, visiting Panama (where her father was born and was Consul from the United States), Columbia, Bermuda, Toronto Canada, Williamsburg, Mt Vernon, among other destinations. She was an inveterate photo taker, and the house is full of albums of flowering shrubs, bushes, potted plants, and countertops loaded with vegetable produce from her large gardens out in back of “Hidden Half Acre” as she named the property which backs up to the railroad tracks. She was also a consummate note taker and journal writer, and she could tell you what bean seed she planted on what day in 1987, planted in the morning or afternoon and what the weather was that day. Jill was very active at her church, Christ Church in Philadelphia, serving on various phone tree and sandwich committees. She was received into the Episcopal Church by her and Bruce’s friend The Rt Rev Lyman Ogilby in 1986. Until she became ill, Jill served as a lector or reader at worship and sometimes passed the common cup at communion. Unless away on a brief vacation to Cape Cod to see her older sister, Jill never missed a 9:00 AM Sunday Eucharist with husband Bruce until the Covid Pandemic hit and shut things down and during which her disease rapidly progressed. In addition to her husband and son, she is survived by her sister, Joan Staples, of Rosemont, and her brother Carlos Berguido III, of California, in addition to brothers and sisters-in –law, nieces, nephews, former students, and her many friends. One long-time friend of 73 years, remembers Jill for two things: her beautiful big brown eyes and the fact that Jill was the only person she had ever met from whom some sort of an untruth or unkind word was never spoken about anyone. Funeral Services will be held at Christ Church Philadelphia, 2nd & Market Sts, Saturday, November 20, 2021, 1:00 PM. Interment private in the Memorial Garden at the church . In lieu of flowers, memorial contributions may be made in Jill’s name to The Agnes Irwin School, Attn: Development Office, 274 S. Ithan Ave, Bryn Mawr, PA 19010.

Jill Berguido Gill, 76, of Haverford died Wednesday morning, 10 November, 2021, sitting up in her big comfortable chair in the bedroom of the house in which she lived for 37 years with her loving and devoted husband, Bruce Cooper Gill, and where... View Obituary & Service Information

The family of Jill Berguido Gill created this Life Tributes page to make it easy to share your memories.

Send flowers to the Gill family.