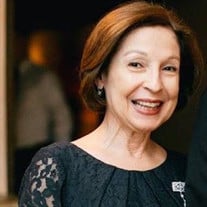 On Monday evening, November 22nd, Joanne Alfano Baker of Radnor, PA died as she had lived, with her beloved husband Stephen by her side. Joanne was born December 20th, 1953 to Sarah and Charles Alfano in Pottsville, PA. The second of three daughters, Joanne was raised in Abington, PA, distinguished herself early as a voracious reader and natural student, and studied English at St. Joseph’s University in Philadelphia on full merit scholarship. At the time of her graduation from St. Joe’s summa cum laude in 1975, Joanne was a member of only the fifth graduating class at the University to include women, the first but not the last time she was a pioneer. After college, Joanne matriculated to Villanova Law School; there, she edited the law review and belonged to the Order of the Coif. It was at Villanova that Joanne began to date - and six weeks thereafter became engaged to - her husband Stephen, the cornerstone of her life from that point on. After her 1978 graduation magna cum laude from Villanova, Joanne began her legal career at Duane Morris LLP in the firm’s corporate law practice, one of few female attorneys at the firm; in 1984, after the birth of her only child and daughter Sarah, Joanne left Duane Morris, taking up a position as an adjunct instructor at Villanova Law School, serving as Chief Clerk to Judge Phyllis W. Beck of the Superior Court of Pennsylvania, and ensuring that Sarah was never the last to be picked up from school. At the end of her career, she served as a consultant on legal giving to the Independence Foundation of Philadelphia. She retired from her professional activities in 2007 but maintained her legal license for some years and concern for justice always, volunteering her time and talent at the Women’s Resource Center in Wayne, PA for many years. For Joanne, there was no place like home, no pleasure like dinner table conversation with her husband, and nothing more important to her than her little family. The 2017 birth of her grandson Cover and 2021 birth of her granddaughter Alice were among the greatest delights of her life. Joanne is survived by her husband Stephen Clinton Cover Baker, daughter Sarah Diane Alexandra Baker (Scott Andrew Adams), grandchildren Arthur Cover Baker-Adams and Alice Pearl Baker-Adams, and sisters Paula (the late Gerald) Kin and Charlene (Douglas) Crowell. Joanne was predeceased by her parents, Sarah and Charles Alfano. In lieu of flowers, the family requests that memorial gifts in Joanne’s name be made to The Episcopal Academy c/o Jen Fifer, 1785 Bishop White Drive, Newtown Square, PA 19073 or online. A memorial service in honor of Joanne’s life will be held in the Class of 1944 Chapel at The Episcopal Academy on Saturday, December 11th, at 11am.

On Monday evening, November 22nd, Joanne Alfano Baker of Radnor, PA died as she had lived, with her beloved husband Stephen by her side. Joanne was born December 20th, 1953 to Sarah and Charles Alfano in Pottsville, PA. The second of three daughters,... View Obituary & Service Information

The family of Joanne Alfano Baker created this Life Tributes page to make it easy to share your memories.

Send flowers to the Baker family.