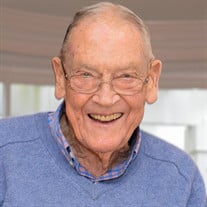 John Clifton Bogle of Bryn Mawr PA died at home on January 16th, 2019 surrounded by his family. He was 89 years old. Mr. Bogle, known as Jack, was born May 8, 1929 in Montclair NJ with his twin brother David Caldwell to William Yates Bogle Jr and Josephine Hipkins Bogle. They joined their older brother William Yates III (Bud) and became known by a lifelong circle of friends as the Bogle Boys. Consistently driven, determined and hard working, the twins followed their older brother to Blair Academy in 1945 and graduated in 1947. Their time at Blair inspired a life long devotion and commitment to the school. After graduating from Blair, Mr. Bogle entered Princeton University as a scholarship student, working as a waiter in the dining halls and in the athletic ticket office to pay for his education. He studied economics, writing his thesis on the then unknown mutual fund industry, and graduated magna cum laude in 1951. While at Princeton he met and was befriended by Jay Sherrerd, class of 1952, who brought Mr. Bogle home to Bryn Mawr to meet his family, including Jay’s younger sister Eve. The two married in 1956 and had six children. After Princeton, Mr. Bogle was hired by Walter L. Morgan, founder of the nation’s oldest balanced mutual fund, Wellington Fund, where Mr. Bogle was the driving force behind Wellington’s growth into a mutual fund family. A dispute with new partners at the Fund lead to his firing and subsequently his founding in 1975 of The Vanguard Group of Investment Companies, two occasions he proclaimed ever since that he underwent “fired with enthusiasm!” Leading the company until his heart transplant in 1996, he nonetheless remained forever after a vocal and strident advocate of the individual investor with books, speeches, opinion pieces, and public appearances. Mr. Bogle was fiercely competitive, especially on the doubles squash courts where opponents feared his determination and drop shot. The family played tennis together, often at their treasured family home in Lake Placid, NY, a place to which they still retreat for the summer months. Not just athletically competitive, his relaxation came from completing the daily New York Times crossword puzzles, including Sunday, in ink, comparing his time to finish to those of his brothers and children. A devoted philanthropist, Mr. Bogle served the Board of Trustees of Blair Academy from 1972 to this day, including 16 years as its Chairman. Among his most remarkable and proud accomplishments, he established the Bogle Brothers Scholarship Fund which to date has funded the education of nearly 200 students. In 1998 he was named Chairman of the National Constitution Center, overseeing its creation and building on Philadelphia’s Independence Mall where it continues as one of the city’s most treasured institutions. He remained active in numerous other local and national educational, civic, medical and arts organizations as well. Mr. Bogle suffered from a rare and degenerative heart disease, and was admitted to Hahnemann Hospital in the fall of 1995 to begin the wait for a new heart. He received the extraordinary second chance at life in February 1996, for which he remained exceptionally grateful. Mr. Bogle is survived by his wife Eve, daughters Barbara Bogle Renninger (Scott), Jean Bogle, Nancy Bogle St John (Gordon), and Sandra Bogle Marucci (Buddy), sons John Clifton Bogle Jr (Lynn) and Andrew Armstrong Bogle, twelve grandchildren, and six great-grandsons, and his brother William Yates Bogle III. He is predeceased by his twin brother David Caldwell Bogle. In lieu of flowers the family requests donations be made to Blair Academy, the Bryn Mawr Presbyterian Church, and Gesu School. Private services for family and friends will be held at Bryn Mawr Presbyterian Church on Monday, January 21 at 11 am.

John Clifton Bogle of Bryn Mawr PA died at home on January 16th, 2019 surrounded by his family. He was 89 years old. Mr. Bogle, known as Jack, was born May 8, 1929 in Montclair NJ with his twin brother David Caldwell to William Yates Bogle... View Obituary & Service Information

The family of John Clifton Bogle created this Life Tributes page to make it easy to share your memories.