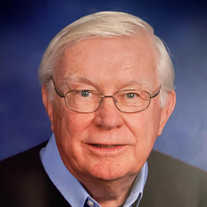 John L. Dale,82, a retired educator at Radnor High School, died peacefully on Saturday, October 17 at his home in Wayne, Pa. He was a resident of Wayne for forty-three years. Born on July 2, 1938 in Bellefonte, Pa, John was the only child of Ralph H. and Martha W. Dale. He grew up in central Pennsylvania and attended the Pennsylvania State University acquiring a Bachelor of Science degree in Secondary Education and his Master’s degree from Temple University. He remained an avid Nittany Lion fan. He began his career at Haverford High teaching U.S. history until 1969,then continued at Radnor High School where he taught for 30 years. While at Radnor, he taught in the history department and was department chair during part of his tenure. He enjoyed his time as the sponsor for Model UN where he was affectionately called Juan by his students. He and his wife Martha especially enjoyed chaperoning the model UN contingent to Harvard, Yale and Princeton. At Radnor, John helped introduce an interdisciplinary program with the English and History departments. John had a keen intellectual curiosity that he brought to the classroom including attending conferences and traveling to Japan on a teacher exchange program. He retired from Radnor High School in 1999 and became a full-time Grandfather. Papa barely missed a dance recital, baseball and soccer game, wrestling match, cross country event, tennis match, a school event, grandparent’s day or any family event and chronicled their lives for each grandchild in individual photo albums and files. A highlight for Papa was the annual family trip to the Outer Banks. He and his wife Martha loved to travel, go to movies and attend the theatre in the city. They attended Philadelphia Orchestra concerts at the Mann and Kimmel Center and both contributed greatly to a number of causes including many of the local arts. John was a frequent contributor to the World Affairs Council and kept up to date attending his fellow Radnor cohort’s Current Events classes. John was a founding member and board member of the Radnor A Better Chance (ABC) program between 1972-1982 and long-time member of the Radnor Historical Society. He will be remembered as a kind person, with a warm smile, a great sense of humor and was the glue that kept his family together. He was predeceased by his wife Martha Willis Dale in 2012. He is survived by his two sons, John L. Dale, Jr. (Suzanne) and Jeffrey B. Dale (Barbara) and two step sons Ian S. Anderson (Vidhi) and William R. Anderson (Crystal). He is also survived by eleven grandchildren: John III (Allison), Steven, Lauren and Jaclyn Dale; Brooke, Matthew and Molly Dale; Rohan and Jay Anderson; and Finn and Audrey Anderson. A memorial service will be held at St. John's Presbyterian Church, 217 Berkley Road, Devon, PA at 11 am, Saturday, October 24. The service will be held outdoors, so please feel free to bring a chair and observe social distancing and wearing a mask. For those unable to attend, there will be a link available 2 days after the service. You can can send your email information to [email protected] In lieu of flowers, the family suggests contributions to The Radnor Historical Society 113 West Beech Tree Lane, Wayne, PA, 19087 or the Martha Dale Endowed Scholarship, Cabrini College, 610 King of Prussia Road, Radnor, PA, 19087. Chadwick & McKinney Funeral Home Inc www.chadwickmckinney.com

John L. Dale,82, a retired educator at Radnor High School, died peacefully on Saturday, October 17 at his home in Wayne, Pa. He was a resident of Wayne for forty-three years. Born on July 2, 1938 in Bellefonte, Pa, John was the only child of... View Obituary & Service Information

The family of John L. Dale created this Life Tributes page to make it easy to share your memories.

Send flowers to the Dale family.