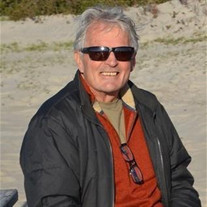 It is with profound sadness that the family of John Joseph “Jake” Powell of Gladwyne, PA announces his passing on Friday, September 22, 2017, at the age of 60. John died suddenly and unexpectedly from complications related to treatment for a longstanding illness that he had kept at bay for over a decade. Many who knew him and enjoyed his intelligence, contemporary insight, wit, metaphysical musings and musical savvy were unaware of the severity of his illness. His inner strength and profound faith allowed him to carry on and remain a devoted husband, dedicated father, engaged community member and loyal friend. In his journey back to his Lord, John leaves behind his wife of almost 30 years, Donna, and his children Joe (27), Colin (25), Luke (18) and Cara Rose (16). John is also survived by his mother, Rosemary Powell, Stroudsburg, PA; his brother Craig Powell, Asheville, NC; and his sisters, Kimberly (Mike) Riley, Stroudsburg and Garyl (Jeff) Strunk, Marshalls Creek, PA and numerous nieces, nephews, aunts, uncles and cousins that he dearly loved. A viewing will be held Thursday evening, September 28th from 6 to 9PM at Chadwick & McKinney Funeral Home, 30 E. Athens Ave., Ardmore, PA. There will be a second viewing Friday morning September 29th at Our Mother of Good Counsel Church, 31 Pennswood Rd., Bryn Mawr, PA from 9 AM to 10:30 AM followed by a Mass of Christian Burial at 11AM. Stories of Jake and his life and philosophies will be shared by his family and his vast circle of friends, colleagues, fraternity brothers, Boy Scouting brethren and everyone else who had the privilege to know him following the Mass at a reception which will be held at the Gladwyne VFW, 320 River Road, Gladwyne, PA 19035. Donations may be made in his name to the Penn Treaty Museum, 324 Richman St., Philadelphia, PA 19125. John gave his time to helping restore the museum building and in his own words: “That the Penn Treaty Museum and the Penn Treaty Park exist and bear witness to the treaty is testimony to the civic responsibility exhibited by generations of Philadelphians, mostly from Fishtown, and is reflective of the moral and individual responsibility embodied in both the peace treaty and the pope’s letter on care for our common home.” No noise Know peace Breathe in Breathe out. No noise Know peace. Breathe in Breathe out. Know silence No grief. Breathe in Breathe out. No doubt Know joy. - John Powell

It is with profound sadness that the family of John Joseph &#8220;Jake&#8221; Powell of Gladwyne, PA announces his passing on Friday, September 22, 2017, at the age of 60. John died suddenly and unexpectedly from complications related to treatment... View Obituary & Service Information

The family of John "Jake" Joseph Powell created this Life Tributes page to make it easy to share your memories.

It is with profound sadness that the family of John Joseph “Jake”...

Send flowers to the Powell family.