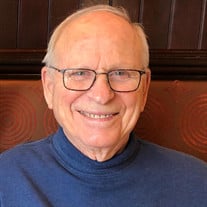 John Kennedy Warfield Barclay “Ken”, of Bryn Mawr and Falls, PA, died peacefully at Bryn Mawr Hospital on July 3, 2021 at the age of 88.Ken was born in Bryn Mawr Hospital in 1933, the son of George Goddard Barclay and his wife, Louyse Warfield Barclay. He was raised in Bala-Cynwyd, graduated from Lower Merion High School and went on to earn a BS and MS in Civil Engineering from The University of Pennsylvania. At Penn he was a member of Delta Psi fraternity and on the varsity lacrosse and wrestling teams. Upon graduation Ken took a job with ACME Markets working in their engineering department. His career was briefly interrupted when he was drafted into the US Navy and trained at Great Lakes Naval Base. Returning to ACME after three months training, he designed and oversaw the construction of food processing plants and warehouses and became expert in designing conveyor systems. He rose to become Vice-President of Engineering of the parent company, American Stores Company, located in Wilmington, DE. After 29 years, when American Stores Company was acquired and moved to Salt Lake City, UT, he chose to stay in Philadelphia and became the CEO of The Warfield Company, an international specialty coatings and resins company associated with Alocit AG. He was married to his beloved wife, Marguerite Smiles Barclay, for 63 years. They had two daughters, Margaret Elizabeth Barclay (John Scholz)of Camden, Maine and Stephanie Barclay Walsh (John Walsh) of Gladwyne, PA. He and his family lived for 58 years in Haverford. He was a member of the Bryn Mawr Presbyterian Church where he served on the Board of Trustees and helped create the church's columbarium. Ken's family had deep roots in Philadelphia, some ancestors coming over with William Penn. He was a member of The National Mayflower Society and The Pennsylvania Society of Sons of the Revolution. He was an active board member of The Friends of Independence National Historical Park during the Bicentennial and was instrumental in having an outdoor tea garden constructed to provide a place of refreshment for Park visitors. As a child Ken spent summers at Beach Haven, NJ, where he learned to sail. Sailing was a life-long love and a Barclay tradition. When his daughters were young, he joined The Harvey's Lake Yacht Club where, every Sunday, he took them for competitive sailing races in his Comet. His daughters believed they could find no greater father or man. They said, "Dad always said he was a lucky man. But it is we who are the lucky ones to have had him in our lives." Ken was an old-fashioned gentleman who lived by a code of honesty and integrity. He was known for his modesty, kindness, generosity and warmth. He loved watching all sports, playing games and gardening. He had a wonderful sense of humor, eternal optimism and unbelievable patience. Besides his wife and daughters, he is survived by three grandchildren: John Barclay Walsh (Erika) of Rosenberg, Texas; Laura Elizabeth Walsh of Manhattan, Kansas; and Christopher Hamilton Walsh of Canonsburg, PA. A graveside service will be held at the Mountain View Burial Park, Falls, PA on Saturday, July 10 at 10:30 AM. A memorial service will be held at a later date in Bryn Mawr. In lieu of flowers, contributions may be made in his memory to either The Mansion at Rosemont Friendship Fund, 404 Cheswick Place, Bryn Mawr, PA 19010 (a fund used to help residents who have outlived their funds or Wounded Warrior Project, PO Box 758516, Topeka, KS 66675-8516 Chadwick McKinney FH www.chadwickmckinney.com

John Kennedy Warfield Barclay &#8220;Ken&#8221;, of Bryn Mawr and Falls, PA, died peacefully at Bryn Mawr Hospital on July 3, 2021 at the age of 88.Ken was born in Bryn Mawr Hospital in 1933, the son of George Goddard Barclay and his wife, Louyse... View Obituary & Service Information

The family of John Kennedy Warfield Barclay created this Life Tributes page to make it easy to share your memories.

Send flowers to the Barclay family.