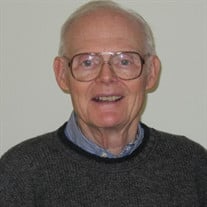 John W. MacMurray Of Newtown Square, PA died October 7, 2018. He was 81 years old. Born in Wilmington, DE, he was the son of the late Paul and Mary Jane MacMurray. He is survived by his wife of 56 years Joy H. (Herman), three sons: John Scott (Annamarie), Joel C. (Jennifer) and James C., five grandchildren, and a brother, Paul C. (Kathleen). John grew up in Philadelphia, graduating from Central High School in 1955 and from Lehigh University in 1959. He began his professional career at Bell Telephone of Pennsylvania in the Traffic Division and then worked at two Philadelphia area brokerage firms gaining investment experience. In 1974, he returned to the telephone company, which eventually became Bell Atlantic, continuing in the investment management field by working for the firm’s pension fund and earning the Chartered Financial Analyst designation in 1977. In 1988, John joined the management team of RJR Nabisco in Atlanta, GA and became the Vice President for Pension and Investments when the company relocated to New York City in 1989. After retiring from full time employment in 1999, John was appointed as the Independent Trustee for the National Railroad Retirement Investment Trust for 9 years. A major portion of John’s life was dedicated to civic service including: president of the Coopertown Civic Association; Haverford Township ward leader and then commissioner of the 5th Ward; and SEPTA board of representatives including a stint as chairman in 1978. In retirement, John enjoyed horseback riding, traveling with his wife, and being a Pop Pop to his grandchildren. He continued his fiduciary service by providing pro bono investment management advice to the Presbyterian Board of Pensions, several local Presbyterian churches, and his alma mater Lehigh University. A Memorial Service will be held at Bryn Mawr Presbyterian Church on Saturday, November 24 at 11AM. In lieu of flowers, the family suggests a memorial donation to Lehigh University, Development Office 306 S. New Street, Suite 500 Bethlehem, PA 18015 or Bryn Mawr Presbyterian Church Endowment Fund 625 Montgomery Avenue Bryn Mawr, PA 19010.

John W. MacMurray Of Newtown Square, PA died October 7, 2018. He was 81 years old. Born in Wilmington, DE, he was the son of the late Paul and Mary Jane MacMurray. He is survived by his wife of 56 years Joy H. (Herman), three sons: John Scott... View Obituary & Service Information

The family of John W. MacMurray created this Life Tributes page to make it easy to share your memories.

Send flowers to the MacMurray family.