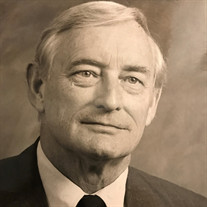 John “Jack” Clark McCombs, born February 3, 1930 in Uniontown, PA to Murel and Harriett McCombs, Jack passed away peacefully on August 21, 2018 at Dunwoody Village in Newtown Square, PA surrounded by his loving family. Jack is survived by his loving wife of 66 years, Kathryn Jane Core McCombs. The two met in high school in Uniontown, PA. Jack graduated from the Wharton School of Business at the University of Pennsylvania (Class of 1952). He was a brother of the Beta Theta Pi Fraternity, a member of the Sphynx Society and manager of the Mask and Wig Club. Jack and Jane married in 1952, the same year he enlisted in the army, serving two years. They initially settled in Rosemont and later moved to St. David’s in 1971 where they raised their three children, Heidi, Clark, and Katie, and many dogs. Most recently, the two lived in Hershey’s Mill and Dunwoody Village in Newtown Square with their dog Benny. Professionally, Jack was a commercial real estate appraiser, certified Master of Appraisal Institute, for a number of companies on the Main Line before he became an independent appraiser. He served as Chairman of the Radnor Township Planning and Zoning Commission and was Chairman of the Board of Associates at Hood College. He enjoyed tennis, skiing, reading and traveling, especially the 58 years of summer vacations spent with his family on Lake Pequawket in Maine. In addition to his wife, Jack is survived by daughter Heidi McCombs Lane of West Hartford, Connecticut, her husband Richard and their daughter Katie; Clark Messmore McCombs of Grand Rapids, Michigan, his wife Karen and their children Patrick, and Erin Lee Gillis, her husband Scott, and Jack’s great-grandson Oliver; and Kathryn McCombs Zirnkilton of St. David’s, Pennsylvania, her husband Frank, and their three children Beauchamp, Heidi, and Peter. In lieu of flowers, the family is asking that donations be given to Bryn Mawr Presbyterian Church or the Cardiology Department of Lankenau Hospital. His memorial service will be held at Bryn Mawr Presbyterian Church, 625 Montgomery Ave., Bryn Mawr, PA on Saturday October 13th. at 2:30 p.m.

The family of John Clark McCombs created this Life Tributes page to make it easy to share your memories.

Send flowers to the McCombs family.