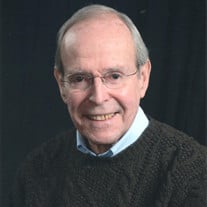 John Lewis Montgomery, II, 91 years old, died Saturday, October 17, 2020. John was born in Wayne, PA, May 1, 1929. He married Natalie Miller Moore on November 2, 1957. He died with her by his side just 15 days short of their 63rd wedding anniversary. John will be remembered for his love of family, for his kindness, for his willingness to lend a hand whenever needed, for his love of gardening, and for his artistic eye and creative talent. He attended The Episcopal Academy, where he made many lifelong friends. John continued to be an active supporter and fundraiser for the school throughout his life. He went on to study architecture at Harvard University, graduating cum laude in 1951, with the top ranking senior thesis. After college, John enlisted in the Air Force during the Korean war where he won the American Spirit Honor Medal, was selected to run a management audit of OCS – presenting his findings and recommendations to the US Congress, and was elected Distinguished Graduate from OCS. Following retirement from thirty-eight years in the very unartistic steel business, John made a career U-turn and became a free-lance designer of porcelain dinnerware. He sold designs to international houses such as Mikasa, Muirfield and Dansk. One pattern, “Treetops,” was purchased by Barbara Streisand to be used by her at a presidential fundraiser. For many years John served on the Board of Point O’ Woods, in charge of architecture, buildings and grounds. Additionally, he and Natalie were long time members of the PO’W Historical society. Their prize contribution was a labor of love researching, writing, photographing and producing a book that traced the architecture and ownership of the community’s homes through its 100 year history. As a member of the Society of the Cincinnati of Pennsylvania, John lead the fundraising campaign for the restoration, and the exhibit commemorating the centennial of the Society’s gift, of the Washington Memorial Equestrian monument to the City of Philadelphia. For the last decade John pursued his love of genealogy compiling twenty, 2” binders of family history. These include original documents, photographs, and family knowledge that in one case lead son to father all the way back to the 900s when the Norse came through Normandy invading England and on to his ancestral home, Scotland. I am proud to say that he did his research the old fashioned way, without the help of modern digital apps or programs. John also took great joy working at Waverly, their retirement community, serving on the Marketing Advisory Committee, Decorating Advisory Committee, the Carlton Advisory Team, and the Fine Arts Committee. He loved St. David’s Episcopal Church, which he attended for most of his life and acted for a time as pro bono Archivist, organizing 300 years of the church’s archives. He was a member of the Society of the Cincinnati in the State of Pennsylvania, The Historical Society of Pennsylvania, The Horticultural Society of Pennsylvania, and a life-long member of The Mill Dam Club. On top of this John was a great dancer, flower arranger, and could set a dinner table that outshone any seen on Downton Abby. Here I quote John: “Through it all, I count as the greatest joys in my life my wife, now of almost 63 years, my son, his late wife, and our two grandchildren.” You are forever in our hearts. A private graveside service will be held at St. David's Episcopal Churchyard.

The family of John Lewis Montgomery II created this Life Tributes page to make it easy to share your memories.

Send flowers to the Montgomery family.