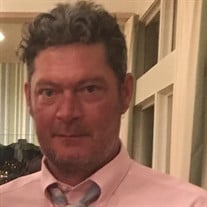 Jon Christopher “Chris” Black, Jr. of Ardmore, PA passed away suddenly on Tuesday, August 17, 2021 at the age of 52. Chris was born in Bryn Mawr, PA to Jon Christopher Black, Sr. and Wendy Joyce Black. Over the years, Chris resided with his parents and brothers, Jamie and Nat, in several different states. Those states included Michigan, Massachusetts, and Connecticut. It was in Connecticut that Chris graduated from Cheshire High School, where he played soccer. He continued his education and participation in soccer at Post College in Waterbury, CT. Chris had many work endeavors before making a career out of hardscaping. Those endeavors included sales, printing, and warehouse managing. Chris followed in Jamie’s footsteps by volunteering at the Merion Fire Company of Ardmore. He spent many years running for Ardmore, earning Fireman of the Year in 1996. His legacy continues with his sons, Connor, Paddy, and Quinn, volunteering with Merion Fire Company of Ardmore. He is survived by his wife and best friend, Amy Mader Black; sons, Brandon (Michelle), Connor, Padraig “Paddy”, and Quinn; daughter, Emma; parents, Jon Christopher Black, Sr. and Wendy Joyce Black; brother, Nathaniel (Kate); and many aunts, uncles, and maternal cousins. He is predeceased by his elder brother, Jamie. The life and memories of Chris will be celebrated with a receiving line on August 28th, 2021, 2-4 pm at Chadwick and McKinney Funeral Home; 30 E Athens Ave Ardmore, PA 19003. In lieu of flowers, contributions may be made in Chris’ memory to The Main Line Chamber Foundation for Hometown Heroes: Bernard Dagenais Main Line Chamber Foundation Thomas J. Hays Scholarship 175 Strafford Ave, Suite 130 Wayne, PA 19087

The family of Chris Black created this Life Tributes page to make it easy to share your memories.

Send flowers to the Black family.