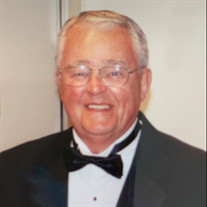 Joseph McAfee Gilliam, Jr. of Waverly Heights in Gladwyne, Pennsylvania, previously of Savannah, Georgia, died peacefully at home on January 23, 2021. He was 87 years old. Joe was born in Lexington, Kentucky, the only child of Joseph McAfee Gilliam and Nellye Cecelia Furlong. Raised in Lexington, Joe attended high school at the Columbia Military Academy in Columbia, Tennessee and was a postgraduate with the class of 1952. From there, he was recruited by the University of Kentucky (UK), joining Paul (Bear) Bryant’s football team. While at UK, Joe was a member of the Kappa Alpha Order where he made lifelong friends. Joe served in the United States Air Force from 1954 to 1958. Stationed in Japan, he carried out intelligence operations during the Cold War as a member of the elite USAF Security Service. In 1958, he returned to UK to complete his education. He graduated with a bachelor’s degree in Political Science in 1960 and a master’s degree from the Patterson School of Diplomacy in 1962. On June 25, 1960, Joe married Laura Roberta Weinman, also of Lexington and a graduate of UK. They had two daughters. The family moved eleven times during Joe’s 33-year career with AT&T. He was recognized by the company for his relentless pursuit of what was best for his customers, and his advocacy for principle centered leadership. He concluded his career in Atlanta in 1995 as a Vice President of Network Operations, then retired to the Landings on Skidaway Island in Savannah to enjoy golf, an active social life and beautiful scenery. Joe was a competitive athlete throughout his life and enjoyed sports as both a participant and a spectator. He was a member of the Episcopal Church and served on the Vestry as well as the Stewardship committee. He was an avid reader and loved to travel, with a particular fondness for the beach. But Joe loved his family above all else. Joe will be remembered for his kindness, integrity and quiet sense of humor. His greatest gift was the love and encouragement he showed others. He was a coach, a role model and a mentor, and he will be missed greatly. We love you, Dad. Joe is survived by his wife of 60 years, Laura; his children Cathy (Scott) Heiser of Omena, Michigan and Beth (Peter) Goodhart of Haverford, Pennsylvania; his 4 grandchildren Ben (Jessica) Heiser, Julia Goodhart, Erin Heiser and Henry Goodhart; and his dog Rosie. A memorial service will be held at a future date. Gifts in memory of Joe may be made to First Tee (https://firsttee.org/donate/) or Penn Memory Center (https://pennmemorycenter.org/gifts/donate/).

Joseph McAfee Gilliam, Jr. of Waverly Heights in Gladwyne, Pennsylvania, previously of Savannah, Georgia, died peacefully at home on January 23, 2021. He was 87 years old. Joe was born in Lexington, Kentucky, the only child of Joseph McAfee... View Obituary & Service Information

The family of Joseph McAfee Gilliam created this Life Tributes page to make it easy to share your memories.

Send flowers to the Gilliam family.