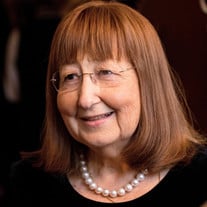 Dr. Josephine Gargiulo Templeton, a former pediatric anesthesiologist, died on October 25th, 2019 in her home in Bryn Mawr, PA. She was 79. Josephine, known as “Pina,” was born on March 19th (the Feast of St. Joseph) in 1940 on the island of Capri, Italy to Orlando Gargiulo and Angelina Lembo Gargiulo. She was the eldest of three girls. Her father was an engineer and officer in the Italian navy. Pina’s family moved to the United States when she was nine. She completed high school and college in the U.S., graduating from Fordham University in 1961 (B.S., Biology). Dr. Templeton then pursued her medical degree at the University of Rome, finishing in 1968. She moved back to the U.S. for her medical internship and residency at Medical College of Virginia in Richmond (1968-74), where she met John Marks Templeton, Jr., also a resident there. They married on August 2nd, 1970 and started joint careers in medicine together. After a residency in anesthesiology at the hospital of the University of Pennsylvania, and a fellowship in pediatric anesthesiology and critical care at the Children’s Hospital of Philadelphia, she accompanied her husband to Virginia while he was stationed in the Navy. In 1977, Dr. Templeton then returned to the Children’s Hospital in Philadelphia as senior clinical anesthesiologist. Pina and Jack worked together at CHOP for 20 years. They often served on surgical teams together, including on pathbreaking teams that worked to separate cases of conjoined twins in the 80s and 90s. Dr. Templeton was a pioneering woman in pediatric anesthesiology for over thirty years , and although she never liked to make much of it, her stellar career laid the groundwork for future women in the field. She was a beloved and devoted teaching doctor as a member of the faculty at the University of Pennsylvania. In her over two decades of service, she was respected and admired at CHOP for her kindness and generosity by fellow physicians, nurses, and hospital staff. She received the Robert M Smith award in 2007 from the American Academy of Pediatrics’ Section on Anesthesiology and Pain Medicine, the premier honor in her field. Dr. Michael Nance, a former colleague of Pina’s who currently holds the Josephine J. and John M. Templeton Jr. Chair in Pediatric Trauma at CHOP remembered her calming presence in the operating room: “No matter how chaotic things might have been on the surgical side of the operative drapes, you knew things were in good hands when you saw Pina on the anesthetic side.” She retired from full time medicine in 1999, but never ceased to carry the gentle and caring physician’s spirit that won her deep affection and gratitude from patients and colleagues. After retiring from medicine, she became heavily involved in various philanthropic endeavors. She was a loyal partner to her husband Jack in his activities as President of the John Templeton Foundation, founded by Pina’s father-in-law Sir John Templeton. Pina served at various times as a trustee of the John Templeton Foundation, the Templeton World Charity Foundation, and the Templeton Press for the past two decades. In addition to her work with the Templeton charities, she and Jack were instrumental in the founding of the Museum of American Revolution, where Pina served on the board. She was grateful to carry on the story of the Revolutionary tradition, and eager for new generations of Americans to learn to appreciate their heritage of freedom, liberty, and sacrifice. Pina was an active member of the Union League of Philadelphia, where she served on the Ladies Committee, and as a Trustee of the Scholarship and the Union League Legacy Foundation. Pina and Jack led the effort to create the Sir John Templeton Heritage Center, and Pina recently funded the Jack Templeton Liberty Lecture Series. She served as a former board member of Opera Philadelphia, Opportunity International, and the Ladies Committee of the Salvation Army. Along with her husband Jack, she received numerous awards for charitable service, including the Heroes of Liberty Award by the National Liberty Museum in 2006, the Crystal Award from the Union League in 2012, and the Special Achievement Award in Philanthropy from the National Italian American Foundation in 2015. She is survived by her daughters Heather Templeton Dill and Jennifer Templeton Simpson; two sons-in-law; six grandchildren; and two sisters. Visitation will be held on Monday November 4th from 5 to 8 PM EDT at Chadwick & McKinney Funeral Home, 30 E. Athens Ave., Ardmore PA 19003. Her Memorial Service will be held on Sunday, November 24, 2019, 3pm, in Lincoln Hall at The Union League, 140 S. Broad Street, Philadelphia, PA, 19102. “In lieu of flowers, please send contributions to Our Mother of Good Counsel Parish in Bryn Mawr, PA or the Anesthesiology Education Fund at Children’s Hospital of Philadelphia, PO Box 781352, Philadelphia, PA 19178. Please make check’s payable to Children’s Hospital of Philadelphia with “In memory of Josephine ‘Pina’ Templeton” written on the memo. You may also give online at https://give.chop.edu. Please check the “in honor or in memory of” box when making your donation. Obituary written by Jeffrey S. Dill.

The family of Dr. Josephine "Pina" Gargiulo Templeton created this Life Tributes page to make it easy to share your memories.

Send flowers to the Templeton family.