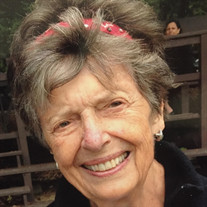 Josephine Frank Zelov, wife of deceased Randolph D. Zelov, Sr. of Rosemont, PA and sister of Armin C. Frank Jr., also deceased, died peacefully at the age of 89 on Wednesday, November 8, 2017. Josie was born on March 24, 1928 in Savannah, GA. She is the daughter of Elsie Espy Frank and Armin C. Frank, Sr. of Milwaukee, WI. She graduated from Rosemary Hall in Greenwich, CT. and Connecticut College. In 1950, she married Randolph (Randy) who at the time was a Lieutenant and graduate of the U.S. Navel Academy. They were married for 57 years until his death. In 1966 after Randy’s 26 years of military service, the family settled in Bryn Mawr, PA. Josie raised her family, served as a volunteer in many community organizations: the Junior League, churches, schools, Navy Relief, the Red Cross and many more. She served on the vestry of the Church of the Redeemer and was chairman of the Denbeigh Day Camp, which served inner city and suburban children. She was a member of the Delaware Valley Association of Exceptionalities which served children diagnosed with learning difficulties. Josie also worked for 20 years, with the Cult Awareness Network; serving families and loved ones caught up in high demand groups. She was a board member for six years. Josie was known for her friendliness, enthusiasm, commitment, sincerity, courage, strength, humor, love of life and her dedication to her family. She truly loved interacting and communicating with multiple generations. She was an avid tennis and bridge player, enjoyed different types of stitchery, designed and taught needlepoint and was a lover of art and music. She was a member of Merion Cricket Club, the Acorn Club, the Gulph Mills Club and the St. Andrews Club of Delray Beach, Florida. She spent her summers at Pocono Lake Preserve. Josie was also a member of the National Society of Colonial Dames of Pennsylvania. She is survived by her three children, Randolph Jr., Charenton Zelov Drake and Peter, nine grandchildren and one great granddaughter. In lieu of flowers, contributions may be made to the Episcopal Community Services, 225 S. 3rd Street, Philadelphia, PA. 19106

The family of Josephine F. Zelov created this Life Tributes page to make it easy to share your memories.

Send flowers to the Zelov family.