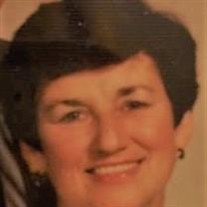 June Collette Jones of Bala Cynwyd, PA, formerly of Wilbraham, MA, passed away peacefully in her sleep on February 20, 2017. She was the widow of Harold K. Jones, of Bala Cynwyd, PA, formerly of Wilbraham, MA, and Wilkes-Barre, PA. June was the last surviving member of the Albert Collette – Florence Bryant Collette family of Wilbraham, MA, pre-deceased by her ten brothers and sisters. She is survived by her family; Douglas Jones and Jeanne Staples of Edgartown, MA and their sons Evan and Benjamin; Daniel C. Jones and Caren Jones of Bala Cynwyd, PA, and their children, Rachael and her husband Andrew King of Reston, VA, Lindsay, and Brandon; Richard A. Jones and Ivon Campos of Philadelphia, Richard’s daughter Natalie, her mother Susan Jones of Gladwyne, PA, and Dohn L. Jones and Kim Olson Jones of Perry, GA, and their children Janene, John, and Nina; brother-in-law Llewellyn and his wife June Jones; sister-in-law Joyce Jones; and many beloved nieces, nephews, and friends. June was born on June 2, 1928 in Wilbraham, MA. After graduating from Classical High School in Springfield, MA, she worked at Mass Mutual Life Insurance Company. There she met the love of her life Harold (Hal) K. Jones. They were married on July 14, 1951, and lived in Wilbraham for twenty-one years. June volunteered at Ring Nursing Home as an Activities Director while raising four sons until the family moved to Bala Cynwyd in 1972 when Harold took a job as a senior executive at Penn Mutual Life Insurance Company in Philadelphia. In Bala Cynwyd, June continued to volunteer at a nursing home and was a member of the Bala Cynwyd United Methodist Church until its merger with Ardmore UMC. Upon retirement, June and Hal divided their time between their home in Bala Cynwyd and their vacation homes in Sweet Valley, PA, “The Water House,” and “Upamont,” their ski house in Wilmington, VT. They were generous hosts, always welcoming their family, along with their many friends and children. June’s life’s work was caring for others, especially children and the elderly. She was a devoted daughter and daughter-in-law, caring for her mother and father-in-law during their final years. She was dedicated to her large family, her ten siblings, two brothers-in-law, and their families, including her numerous nieces and nephews and their children. In many ways she kept her large family together through her regular calls, thoughtful gifts, cards, letters, and visits. Always impeccably dressed, she was affectionately teased for being a dedicated ‘fashionista’ - a regular fixture at Lord and Taylor. June’s most cherished role was that of mother and grandmother. Famous for always having a story, anecdote, or recollection to share, she will live on with steadfast love and affection in the memories of her family and friends. In lieu of flowers, the family kindly suggests memorial contributions be sent on June's behalf to PeaceQuilts or The Buoniconti Fund to Cure Paralysis, two organizations her family established. PeaceQuilts, Inc. haitipeacequilts.org The Buoniconti Fund to Cure Parlysis http://www.themiamiproject.org/chapters/philadelphia/

The family of June C. Jones created this Life Tributes page to make it easy to share your memories.

Send flowers to the Jones family.