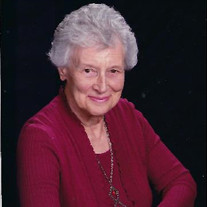 Kathleen J. Moyer, Ph.D. (nee Forry), a beloved professor of sociology at Holy Family University for many years, died on February 28, 2020 after a long struggle with Parkinson’s Disease and Lewy Body Dementia. She was 84 years old and died in her daughter’s arms. Dr. Moyer was pre-deceased by her son Douglas S. Moyer (June 14, 2008) and her former husband Ivan (February 28, 2019). She is survived by three half-sisters (Julie Forry Hyser, Suzanne Forry, Donna Forry (David Peters) and their families), her daughter Judie McCoyd (Jim Baumohl) and foster son Emanuel Njomo (Suzanne), her grandchildren (Toni (Mike), Ryan (Cait), Krista, Ian and Paul, Emmanuel Jr., Cameron, & Stefan (Emmanuel’s four sons)), and four great-grandchildren (Mehki, Hannah, Sydney, and Kingston). Born to Jonathan and Eunice Forry in the small town of Myerstown, PA, Kat (as she was known then) was shaped by her parents’ divorce. She described her childhood as a time of showing that she and her parents were good people as illustrated in her good behavior and ability to achieve. Raised by her maternal great-aunt Mimi with her father’s financial support, she stayed connected to her mother (who had moved to Philadelphia) through their shared love of playing piano and organ. Each of her parents remarried happily. She excelled academically and was active in choir, drama and other activities at Myerstown High School (class of 1953). She graduated from Albright College Magna cum Laude in 1957 and having met Ivan there, they married in 1957. They moved to State College immediately after their marriage and she was the organist and he the minister for the newly founded Park Forest Village United Methodist Church. She earned her Masters in Sociology at Penn State during that time while also giving birth to Judie and Doug. The family moved to Columbus, Ohio in 1965, where they resided until 1972. She served as an organist at First Congregational UCC Church for most of those years. Emmanuel joined their family in 1968. With each move, they re-installed the family pipe organ which she practiced on most nights after the children went to sleep. They needed her to play so they could fall asleep. The family moved back to the Philadelphia area in January 1973 (with the organ) and remained in the area from then on. Kathy (as she was known by then) was active as ever. She served as organist for Bethany Church in Northeast Philadelphia. While raising the children, she completed her Ph.D. in Sociology at Bryn Mawr College (1979). She became a professor at Holy Family College, served as Division Head of Liberal Arts, received the Lindback teaching award, and retired as Professor Emerita in 2004. She served in leadership roles with the League of Women Voters, the American Guild of Organists, and the Pennsylvania and Eastern Sociological Associations. She also performed with Singing City, traveling to the Middle East and Russia on their peace-making tours as well as participating in their active concert schedule in the greater Philadelphia area. She moved to Mendelssohn Club for her choral activities in the 1990s and was deeply saddened when she needed to stop due to vocal changes in the early 2000s, a first warning of Parkinson’s, recognized only in hindsight. Following her amicable divorce from Ivan in the mid-1990s, she moved to Drexel Hill and served as Christ Lutheran’s organist. In 2014, she moved to The Quadrangle (independent living) and to Personal Care in 2017. Everyone who knew her knew her unshakable integrity, her commitment to caring for others, and to attending to every detail. It was important to her to be kind and she became quietly but firmly confrontational only in her advocacy for others’ needs. A friend observed: “Kathy was the most caring person I know. She tried to care for everyone- family, students, friends, clients and all the downtrodden of the world. We have lost a great lady.” Kathy loved her family with every ounce of her strength and delighted in her grandchildren and great grandchildren. She will be sorely missed. Burial is private. A public memorial service will be held at Bryn Mawr Presbyterian Church on May 1 (Friday) at 1:00, to celebrate her life with the music she loved. A small reception at the church will follow. Donations in her name are welcome to the Upper Darby Community Outreach Corporation (7240 Walnut St. Upper Darby, PA 19082), Bryn Mawr Presbyterian Music Ministry (625 Montgomery Ave Bryn Mawr, PA 19010), or a progressive organization of your choice.

Kathleen J. Moyer, Ph.D. (nee Forry), a beloved professor of sociology at Holy Family University for many years, died on February 28, 2020 after a long struggle with Parkinson&#8217;s Disease and Lewy Body Dementia. She was 84 years old and... View Obituary & Service Information

The family of Kathleen J. Moyer Ph.D. created this Life Tributes page to make it easy to share your memories.

Send flowers to the Moyer family.