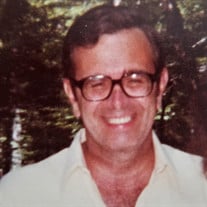 Kenneth Conarroe Trotter, 87, passed away on Saturday, June 17 at his residence in the Quandrangle in Haverford. Ken was born on August 22, 1929 in Philadelphia, Pennsylvania to Kenneth Trotter and Malvina (Billy) Holcombe Trotter. Growing up in Merion, he attended Merion Elementary School, Bala Cynwyd Junior High School, and Lower Merion High School, from which he graduated in 1946. He entered Bowdoin College (Brunswick, Maine) and studied there until 1950 when he enlisted in the United States Navy. After four years of service as a radio mechanic on tours of duty in the Atlantic Ocean, Ken was honorably discharged and resumed his education in 1954 at the University of Pennsylvania, where he graduated with a Bachelor’s of Science in Education in 1956. In 1954 he also married Anne Patricia Hargadon of Ardmore, who preceded him in death in 2014 shortly after they celebrated their 60th wedding anniversary. Marple-Newtown High School was the site of his first appointment as a school teacher, but Ken soon moved on to a position at the former Ardmore Junior High School, where he taught from 1956 until the school’s permanent closing in 1978. At Ardmore, Ken ‘s teaching portfolio embraced a broad array of subjects that included mathematics, German, history, English, world cultures, and even Russian, which he introduced as an extra-curricular academic activity following the launch of the Soviet Sputnik satellite in 1957. Throughout most of his tenure at Ardmore, Ken was a common sight at the school long after classes had ended for the day, either on the athletic field, where Ken served as coach of the school’s track team in the 1960s and 1970s, or in the school auditorium as he guided students through rehearsals for the original spring musicals (including “First Place,” “Competition,” “Rancho de l’Amour,” and others) that he and his colleague Bill Gray co-wrote over the course of many years. While teaching at Ardmore, Ken also completed a Master’s of Science in Education at University of Pennsylvania as well. Upon the closing of Ardmore Junior High School, Ken devoted the remaining years of his service as a teacher to schools where he himself had studied, first at Bala Cynwyd Junior High School from 1978 to 1981 and then at Lower Merion High School, where he taught from 1981 until his retirement in 1993. Apart from his legacy as a talented, dedicated, and much beloved teacher, Ken gave back to the community of his upbringing in other ways as well. An avid piano player, Ken regularly provided the musical accompaniment for the Christmas carol sing-along at Narberth train station that preceded Santa’s annual arrival on the Paoli local. He and his fellow teachers Leonard Murphy and Pauline Foster formed the musical combo Sentimental Journey which regularly performed in benefit concerts for senior living residences in the area. Many a production at the Narberth Community Theatre benefitted from the contributions of Ken, whether as set-builder, musician, or actor. Ken and Anne spent 50 summers together at their cabin in Stinson Lake, New Hampshire, where just as on the Main Line, they shared many lifelong friends. It was at Stinson Lake that Ken taught Anne and their three children to swim, discovered a passion for sailing, and honed his considerable skills as a carpenter and engineer by installing the plumbing and electricity for the cabin, constructing outbuildings, and fitting out the interior with rooms and a loft. Just as on the Eastern Main Line, Ken took an active role in the life of the Stinson Lake summer community, serving as president of the Stinson Lake Association, writing weekly reports about doings on the lake for the Plymouth Record, and regularly calling out the numbers for the weekly bingo games at the community house. Ken is survived by his children Mark Trotter, Julia Trotter, and Kit Markle; by his grandchildren Joseph Markle, Daniel Markle, Arina Trotter, and Maria Trotter; and by his sister Margaret “Peggy” Thomas. He was preceded in death by his wife, parents, and brother, John Trotter. Ken’s family will receive visitors from 11:00 to 11:30 am at the Quandrangle (3300 Darby Road, Haverford, PA) this Saturday, June 24. A short memorial service will follow. In lieu of flowers, the family requests that donations be made to the Lower Merion Scholarship Fund or the Southern Poverty Law Center.

Kenneth Conarroe Trotter, 87, passed away on Saturday, June 17 at his residence in the Quandrangle in Haverford. Ken was born on August 22, 1929 in Philadelphia, Pennsylvania to Kenneth Trotter and Malvina (Billy) Holcombe Trotter. Growing up... View Obituary & Service Information

The family of Kenneth C. Trotter created this Life Tributes page to make it easy to share your memories.

Send flowers to the Trotter family.