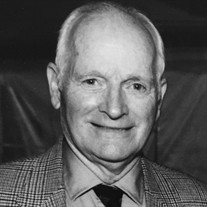 L. Talbot Adamson, 97, son of William and Amelia Green Adamson, died peacefully at home at Waverly Heights in Gladwyne on June 17, 2019. He is survived by his loving wife of 35 years, Maisie Adamson, daughter Sabina A. Wood, son Talbot S. Adamson (Jacqueline), stepsons Richard C. Storey III (Lily) and Peter K Storey (Merin), grandsons Harrison W. Wood III, Alexander S. A. Wood, Richard (Alexis), David (Pinwen), Timothy (Makoto) and Alexander Storey, granddaughter Lydia Storey and two great granddaughters. He was preceded in death by his twin brother, William Adamson Jr. Mr. Adamson was raised in Chestnut Hill, attended Penn Charter School and graduated from St Paul’s School in Concord, New Hampshire, where he played six different sports on ten teams. At Princeton University he played football, ice hockey and ran track. Officially a member of the class of 1944, he accomplished his engineering degree in three years to enlist in the US Navy. He served our country in the Pacific aboard the USS PGM-11 and miraculously survived the Battle of Okinawa and was promoted to Lieutenant JG. His ship, assisting minesweepers, rescued the surviving crew of the USS Emmons after being severely damaged during the battle. Returning to civilian life in 1946, he joined Bakelite Corp as a chemical engineer, followed by ten years at the Taylor Fibre Corp in Valley Forge. He worked on the design of printed circuit boards for television and helped Howard Head with the design of the Head Ski. He then became interested in the development of the Common Market in Europe for the participation of American companies. He was President of the Atlee Civic Association and founder & President of the Radnor Land Conservancy. His favorite sports were sailing & skiing. He played tennis and golf and coached youth ice hockey. Upon retirement his love of art inspired him to take up oil painting. At Waverly Heights he was active on several committees. His funeral will be at the Church of the Redeemer at 230 Pennswood Rd Bryn Mawr, Pa on Saturday, June 29th at 2 pm ; Interment will be private.

The family of L. Talbot Adamson created this Life Tributes page to make it easy to share your memories.