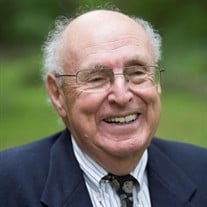 Lawrence Joseph Borger July 26, 1936 – May 25, 2020 Lawrence Joseph Borger, aka, P-Bear, Pop-pop, Lump, Larry passed peacefully in his sleep on Memorial Day May 25, 2020 in Malvern, PA. He is survived by his wife Julia, daughters; Julia Ferguson, Caroline Browne, and Lisa Murphy and sons; Lawrence, James and Thomas Borger. He is survived by his sister, Patricia Wenzel. He is also survived by his 19 grandchildren and his 5 great grandchildren. He was a Patriotic Marine veteran, an entrepreneurial businessman, a lover of baseball, a Teacher, but above all, he was DAD. Larry was a family patriarch who not only provided for his family—putting all 6 kids through college--but still found time to continue his passion for music via the guitar, banjo and even the ukulele. Larry also had a tremendous wit and sense of humor. Larry’s father Harry was a Navy welder, his mother Dorothy was one of the first female workers at RCA. Larry was a self-made man who grew up in a working class neighborhood of Camden, NJ. Larry graduated #3 in his Camden Catholic high school class of 400, played varsity baseball, was the senior class President, and still had time to teach himself guitar. He spent his college summers working at some of the finest “resorts” at the Jersey shore managing the bingo parlors along the boardwalk in Wildwood. He earned a full four-year academic scholarship to La Salle College where he finished in the top 10% of his class, graduated cum-laude, was manager of the swim team, a member of the Glee Club and was the sports editor of the weekly paper. There, he met the love of his life, Julia Henry, who was the daughter of and assistant to the Athletic Director at La Salle--Jim Henry. After Graduation in 1958 he went to Officer Candidate School and was commissioned as a 2nd Lieutenant in the United States Marine Corps. His desire to become an Aviator was stymied due to his lack of 20/20 vision. He was able to leverage his strong intellectual aptitude and test score to win a coveted slot at Air Traffic Control School. He was stationed at the 3rd MAW Marine Base El Toro and coordinated the introduction of the A4 attack jet into the Marine Fighter Squadrons. Procter & Gamble was also looking for “a few good men” and hired Larry in 1962. He spent nearly a decade working in brand management at Procter & Gamble in Cincinnati before moving to Philadelphia to work at Scott Paper Company in 1971. Eventually, his entrepreneurial fire broke through, as Larry created an entirely new division—the DIY division that opened up new channels of distribution for paper products geared towards painters, builders and “do-it-yourselfers.” He invented proprietary drop cloths, with absorbent paper on one side and plastic on the other, as well as the classic “Rags in a Box!” He was President of the most profitable division at Scott Paper. Scott Paper was then acquired by Kimberly Clark in 1995. Dad was named President of the combined division which was a great success until his retirement in May 2001. In addition to his business accomplishments he had a strong desire to “give back”. His love of baseball continued throughout his life as he coached many of the local little league teams and eventually became the President of Devon Strafford Little League. His love of teaching led him to teach courses in entrepreneurship at Duke’s Fuqua School of Business and locally at St. Joseph University. When he retired, he decided to return to his early summer roots – the Jersey shore. Prior to his retirement he purchased a home in Avalon, NJ in the early 1990’s. The beach house quickly became a magnet attracting all of the family members who had been scattered across the country. We were all very fortunate to experience the joys of the “shore” with him as a family. He was a prescient man. It’s as if he knew…if he built it…we would come. And we did. This labor of love not only provided lasting memories for his children but all of his grandchildren. Those memories are growing in strength and significance, especially now. We close with the last stanza of the Marine Corp hymn: “If the Army and the Navy ever look on Heaven’s scenes; They will find the streets are guarded by United States Marines”. Semper Fidelis In lieu of flowers please consider helping a cause close to Dad’s heart: The Marine Corps Scholarship Foundation: Contributions in memory of Lawrence, with the goal of creating a Lawrence J. Borger Memorial Scholarship, can be made to the Marine Corps Scholarship Foundation, a nonprofit that provides scholarships to the children of Marines and Navy Corpsmen in need. Donations can be made at www.mcsf.org or mailed to MCSF, 909 N. Washington St, Ste. 400, Alexandria, VA 22314. Please include a note that your contribution is being made “ in memory of 1st Lieutenant Lawrence J. Borger”.

The family of Lawrence J. Borger created this Life Tributes page to make it easy to share your memories.

Send flowers to the Borger family.