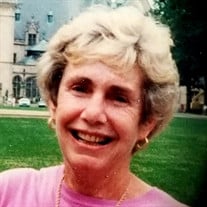 Linda Ann Oberly (nee Henley) of Dunwoody Village, died peacefully on September 25, 2021 after a brief illness. Linda was born on October 22, 1938 and bred as a Philadelphian, having been raised in Rosemont. She was the daughter of the late Robert C. Henley and Evelyn (Markey) Henley. She attended Friends Central and graduated from The Baldwin School. She graduated from Hollins College in 3 years and went on to travel Europe for some time thereafter, sparking her love of travel. In her early 20s, she met and married Robert Peters Oberly (Bob) on May 6, 1961, and raised their three children in Strafford then Devon, Pennsylvania. Upon Bob’s retirement from a long and successful career in law, Linda and Bob moved permanently to West Barnstable, MA, Cape Cod, where they thrived in their new surroundings and made many dear friends. They were married 41 years at the time of Bob’s passing in January, 2002. Linda ultimately relocated back to the Philadelphia suburbs 8 years ago and was living at Dunwoody Village, Newtown Square, PA until the time of her passing. She was the consummate mother and wife, keeping everything and everybody well organized. She and Bob enjoyed many years of athletics, particularly tennis, paddle tennis and golf, and social activities at Waynesborough Country Club in Paoli, PA. To know her was to respect her skill at gardening. She not only kept a showcase yard but contributed her considerable botanical skills volunteering at Waynesborough and local botanical gardens. She cherished botany courses she took at the Merion, PA Barnes Foundation, famous for it’s extensive gardens and world-renowned art collection. Linda and Bob’s home was always filled with love, laughter, children and friends, and dogs were always part of the melee. Until her death, Linda’s beloved and ebullient black lab, Lucibel, was always close at hand. Her ever-present companion and best friend. She adored the mountains and had particular fondness for the Colorado Aspen trees and it was common to hear John Denver being played and sung by the whole Oberly family. Linda and Bob loved to entertain for many years, enjoyed and excelled at bridge. Linda, too, was a voracious reader and loved to travel the world, with friends, her children and solo, after Bob’s death. She never met a stranger, had an infectious laugh and joie de vivre. She will be missed by many and was dearly loved. Closest to Linda’s heart, beyond her family, was the Bryn Mawr Presbyterian Church, where she was baptized as an infant, later married and nurtured her family in the Christian faith. She was a faithful parishioner for her entire life and enjoyed many bible study classes and beautiful services, singing hymns she always cherished. Her husband is interred at BMPC, where Linda will rest peacefully beside him. Linda is survived by her three children: Lisa Ann, Norwood, MA: Amy Lyle, Scottsdale, AZ; and Henry Sherman "Hank" Oberly (Deb), Malvern, PA; sisters, Joan Mattoon, Lafayette Hill, PA (the late Peter M. Mattoon) and Sally O’Brien (the late William O’Brien); grandchildren, Robert Peters and Brooke Elizabeth Oberly; many nieces and nephews whom she cherished. Her Memorial Service will be held on Monday October 4th. at 11 AM in Bryn Mawr Presbyterian Church, 625 Montgomery Ave., Bryn Mawr PA 19010, where her service will be livestreamed at https://www.bmpc.org/livestream Donations in Linda’s memory should be made to the Bryn Mawr Presbyterian Church, Bryn Mawr, PA.

Linda Ann Oberly (nee Henley) of Dunwoody Village, died peacefully on September 25, 2021 after a brief illness. Linda was born on October 22, 1938 and bred as a Philadelphian, having been raised in Rosemont. She was the daughter of the... View Obituary & Service Information

The family of Linda Ann Oberly created this Life Tributes page to make it easy to share your memories.

Send flowers to the Oberly family.