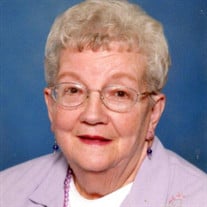 Louise Montgomery McLean, formerly of Ardmore, PA, passed away peacefully on September 24, 2020, at the age of 90. Louise was born in Haverford, PA on September 14, 1930. She spent the majority of her life living in Ardmore, except for a few years spent in suburban Chicago. Louise graduated from Lower Merion High School in 1948. She worked at Edie’s Hallmark shop in Suburban Square and unknowingly waited on many famous people. Louise loved cards and received over 100 cards for her 90th birthday. After raising her children, she thoroughly enjoyed her two granddaughters; attending all of their softball and soccer games, plays, concerts, and dance recitals. Louise loved being a part of the Ardmore community. Some of her favorite places in town included the Ardmore Library, Strawbridge & Clothier, and Gillane’s after church on Sundays with her friends. Even after moving to Media, PA, Louise’s favorite trips were always to places in Ardmore. Louise was a lifetime member and very involved in the life of the Ardmore Presbyterian Church. She sang in the choir for many years, was a deacon, participated in Bible study groups, went on church trips, and was always collecting donations for the church’s Christmas Box. Louise was very proud of her Irish heritage. She regularly wrote letters to relatives and even visited Ireland once. Louise was also a very loyal fan of the Philadelphia Phillies and Chicago Cubs. She enjoyed watching baseball games on television while listening to radio announcers. She also loved Villanova basketball and enjoyed watching their games. Wife of the late Wallace J. McLean and mother of the late Martha L. McLean. Louise is survived by her daughter Amy L. Pearce (David), granddaughters Christina M. Brennan & Katherine C. Borsuk (Raymond), and her beloved dog Lucy. A service will be held at 1pm on Thursday, October 1, 2020 at the First Presbyterian Church of Ardmore. Family and friends may call at 12:30pm. In lieu of flowers, memorial donations may be made to the Ardmore Library or the Ardmore Presbyterian Church. Please adhere to wearing a mask and social distancing. The service will be livestreamed at https://ardmorepres.org/live

Louise Montgomery McLean, formerly of Ardmore, PA, passed away peacefully on September 24, 2020, at the age of 90. Louise was born in Haverford, PA on September 14, 1930. She spent the majority of her life living in Ardmore, except for a few... View Obituary & Service Information

The family of Louise M. McLean created this Life Tributes page to make it easy to share your memories.

Send flowers to the McLean family.