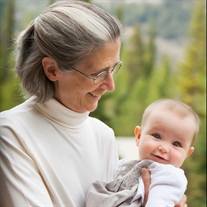 Lucinda Mary Hamilton passed away at home in Gladwyne on December 31st 2017 as the result of a heart attack. She was born on July 18, 1942 to Elizabeth Robinson Pantaleoni and Raoul Pantaleoni of Watergate in West Arlington, VT. Lucinda was always known to friends and family as “Pinkie”, a nickname derived from her sister’s early pronunciation of Lucinda as Lupinka. She graduated from Mary Institute in St Louis, MO in 1960, and from Radcliffe College in Cambridge, MA in 1964. While in college she met her future husband, Richard Hamilton, and they were married on August 14, 1965. They have two daughters. Pinkie was a woman of strong intellect and although their lives followed Rick’s academic career (Syracuse, NY to Ann Arbor, MI to Bryn Mawr, PA), she was his intellectual partner. She possessed an incisive logic, a capacious memory and a love of language. Her grammar lessons will live on in her children and grandchildren. She had little patience for moral laziness, self-aggrandizement, or self-absorption and felt that the best antidote to these was to get involved in helping others — a belief she embodied in her work with the Hunger Committee and the University City Hospitality Coalition. She loved to garden, was a member of the Four Counties Garden Club and the Herb Unit, and could often be found “just digging in the dirt” to create her garden masterpieces (while remembering the Latin names of everything she planted). She had skated as a child and took it up again when her daughters were young. Even after the girls quit, she continued to skate and was an active member of the Philadelphia Skating Club & Humane Society, serving in a variety of roles including Vice President, Test Chairman, and Chairman of the Ice Committee. She was still skating with her coach and friend Tommy Kaine until the time of her death. Pinkie believed that a good marriage was one that allowed “an eternal conversation” as she had with her husband, Rick. Her daughters remember dinner discussions ranging far and wide in topic and content. As a mother she was selfless, unconditionally loving, and a guiding and powerful moral force in the lives of her children and grandchildren. What is touted today as the gold standard in parenting practices were second nature to her. It is hard to create a short summary of Pinkie. Although raised in St. Louis, she stayed a Vermonter at heart, she was an active vegetarian, an avid hiker, committed to water conservation and the reduction of waste, and believed in humanitarian causes, particularly those related to animals and hunger. She was equally happy discussing the Mongol contravallation tactics adopted by the 19th C French army or her respect for John Gilbert Winant, watching vultures on her walk with her Corgi, Jeffrey, working on her International level dances at the Ardmore skating rink, gardening, or solving a puzzle (crossword, jigsaw, sudoku, cryptogram). Within her family, she may be best remembered for her ability to strike up a conversation with anyone, often starting with a heartfelt compliment (hairdo, footwear, dog) and ending with a perspicacious question about the individual’s interests and passions. She is survived by her husband of 52 years, Richard Hamilton, her 2 children, Sarah Hamilton Phocas (George), Ellen Hamilton Newman (Lee), 4 grandchildren (Allie, Charlie and Ben Phocas and Isabella Newman), her sister, Valerie P Terry (W.T. Terry, Jr.), two brothers, Christopher Pantaleoni (Susan) and Jonathan Pantaleoni (Jane), and her 5 nieces and nephews (Michael Terry, Elizabeth Jane Terry, David Pantaleoni, Matthew Pantaleoni, and Molly Eames). We are all blessed to have had her in our lives. A memorial service will be held in the spring. In lieu of flowers, donations can be made in Pinkie’s name to Best Friends Animal Society or the Hunger Committee of the Bryn Mawr Presbyterian Church.

Lucinda Mary Hamilton passed away at home in Gladwyne on December 31st 2017 as the result of a heart attack. She was born on July 18, 1942 to Elizabeth Robinson Pantaleoni and Raoul Pantaleoni of Watergate in West Arlington, VT. Lucinda was... View Obituary & Service Information

The family of Lucinda Mary Hamilton created this Life Tributes page to make it easy to share your memories.

Lucinda Mary Hamilton passed away at home in Gladwyne on December...

Send flowers to the Hamilton family.