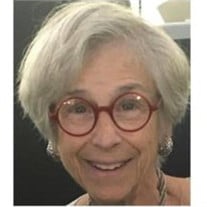 Lucinda Sandford Landreth of the Society Hill section of Philadelphia age 73 died on January 31, 2021 from complications instigated by her three-and-a-half-year struggle with Pancreatic Cancer. Lucinda’s zest for life and enthusiasm for dealing with adventure in her business life, her not for profit work and her personal life that welcomed people with a myriad of personalities to became attracted to be with her. She and her husband have traveled to 73 different countries which is a direct result of her foreign exchange schooling in Thailand as a school student and Japan as a college student. She was a partner with her husband Charles in the firm of Wentworth Capital Partners, An independent Trustee of the Delaware Funds by Macquarie, former President and current trustee of the Presser Foundation, A Certified Financial Analyst, a member of the Economic Club of New York, the CFA society of Philadelphia and the forum of Executive Women. Her Investment career began at PNC Bank in 1969 where she became Senior Vice President, Managing Director of the investment and research group. She joined Alex. Brown Capital Advisory and Trust located in Baltimore in 1995 where she was Chief Investment Officer. In 1997 she joined Fortis, Inc located in New York City, and owned by a Dutch Financial Institution with the same name, as Executive Vice President, Director of equity investments and chief Investment officer of the Fortis Mutual Funds. In 2002 Fortis became known as Assurant, Inc where she was President and Chief Investment officer, Assurant Asset Management. She is the former President and current trustee of the Presser Foundation, former Vice Chair and current Emerita Trustee for The Academy of Vocal Arts, Former Trustee of Wilson College in Chambersburg, PA where she earned her Bachelor of Arts degree, a former executive committee and board member of the Presbyterian Medical center, a former trustee and executive committee member of International House of Philadelphia, former Executive committee and board member of Greater Philadelphia Cultural Alliance, Chair of the board of trustees for LEADERSHIP, Inc. and President and Board member of The Junior League of Philadelphia. She is survived by her husband Charles B. Landreth, two Landreth step children and their spouses, Loving Grandma to Hartley Landreth and four sisters who all live in different states. She was pre-deceased by a sister Priscilla Sandford and her brother Joseph Sandford. A memorial service will be held when the weather and the effects of Covid-19 permit. She will be buried in the family burial ground in Wolfeboro New Hampshire where the family has summered since 1897 Donations in Cindy’s name may be made to the Wentworth Watershed Association PO Box 2235 Wolfeboro, NH 03894 https://wentworthwatershed.org/

Lucinda Sandford Landreth of the Society Hill section of Philadelphia age 73 died on January 31, 2021 from complications instigated by her three-and-a-half-year struggle with Pancreatic Cancer. Lucinda&#8217;s zest for life and enthusiasm for... View Obituary & Service Information

The family of Lucinda Sandford Landreth created this Life Tributes page to make it easy to share your memories.

Lucinda Sandford Landreth of the Society Hill section of Philadelphia...