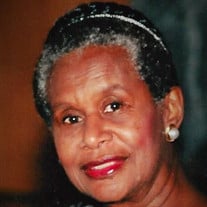 Dr. Lynnette Hammond McNeal, noted African American psychiatrist and resident of Rosemont, Pennsylvania, passed away on Thursday, March 21, 2019 at the age of 87. Lynnette is survived by her husband of 58 years, Dr. George Edward McNeal, Jr.; her brothers, Charles Caesar Hammond and Leonard Stanford Hammond; her daughters Frances, Nancy, Jacqueline and Marilyn; her son-in-law Liam; her grandchildren Claire and Liam; many nieces and nephews, and other members of her extended family. Lynnette was born on August 19, 1931 in Philadelphia, PA to Horace and Alberta Hammond (nee Johnson). She had ten brothers and sisters and lived with her family in Elmwood. She attended Girls’ High in Philadelphia, but transferred to John Bartram High School from which she graduated in 1949. In December 1949, she enlisted in the US Army when the Army was still working to comply with the 1948 Executive Order to desegregate the US Armed Forces. She began her service in one of the last remaining all black female segregated units. During her service, among other events, she spent two years in Japan, during the Korean War, as a lab technician in an army hospital. She was honorably discharged from the Army in 1953 at the rank of Corporal, having received a Korean Service Medal and a United Nations Service Medal. After the conclusion of her service, Lynnette continued her studies and graduated in 1957 from the Philadelphia College of Pharmacy and Science (now the University of the Sciences in Philadelphia). She subsequently attended the Women’s Medical College of Pennsylvania (now Drexel University College of Medicine), earning her MD degree in 1961. Lynnette earned board certification from the American Board of Psychiatry and Neurology with a specialty in psychiatry in 1973. She married George in 1960 and together they raised four children. She had a love of, and received numerous awards for her work in, chemistry, which led to a long career in medicine and psychiatry. She interned at Germantown Hospital and afterwards completed her residency at Norristown State Hospital in psychiatry. At the Norristown State Hospital, she served as the Director of the Adolescent Unit. Later in her career, she was a research physician at Merck Sharp & Dohme (now Merck & Co), and also practiced at the Haverford State Hospital. Lynnette was a lifelong student of the arts and studied French, Italian, German, Spanish, guitar, violin, and piano. She was a patron of the theatre and the symphony and also enjoyed taking long walks around Ashbridge Park and Rosemont College. She was fond of gardening and cared for numerous indoor and outdoor plants at her home. With her husband, George, Lynnette traveled extensively, including to Egypt, China, India, Alaska, Hawaii, the Caribbean, and throughout Europe. In lieu of flowers, donations in memory of Lynnette may be made in her name to the Mary Louise Curtis Branch of the Settlement Music School in Philadelphia. A Memorial Service is being planned for a future date.(Please refer back to our site for updates)

The family of Dr. Lynnette Hammond McNeal created this Life Tributes page to make it easy to share your memories.

Send flowers to the McNeal family.