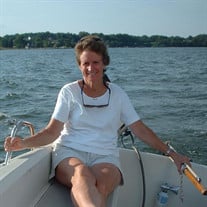 Marcy Wells Hasbrouck, 72, a high-spirited sportswoman, classical-music lover and mainstay of Philadelphia-area volunteerism, died on October 3rd, 2018 after a seven-month battle with glioblastoma, a rare brain cancer that also recently claimed the late Sen. John McCain. A resident of Society Hill and Queen Village for nearly half a century, Mrs. Hasbrouck died in her home at Cathedral Village, a continuing-care community in the Andorra section of Philadelphia, where she and her husband, Allan, lived since she became ill. Known among her many friends for her robust sense of humor — which sometimes bordered on the risqué — she kept a ready store of bon mots and aphorisms. Perhaps her signature quip was the faux Latin imperative “Semper ubi sub ubi.” It translates phonetically to “Always wear underwear.” She described herself as “the goddess of Small Things — children, mice, community garden, grandchildren, a small row home with garden, cats, $50 contributions, baby trees.” A nurturer and lifelong advocate of early childhood education, she taught preschool classes at St. Peter’s School in Society Hill. She retired in 2005 and later served on that school’s board of trustees. She was a member of historic Christ Church at Second and Market Streets, heading its property and outreach committees during several terms on the church vestry (governing body). She served in many other volunteer capacities with Christ Church, as well as with Episcopal Community Services. An avid gardener, she grew flowers and herbs on her plot in the Queen Village/Southwark Community Garden. For many years she was an officer and board member. Active with Queen Village Neighborhood Association, she was among other things a “tree tender,” helping with the hard work of planting and maintaining shade trees to grace the neighborhood. Mrs. Hasbrouck loved sports of all varieties. She was an aggressive tennis player and adventuresome sailor. She swam, bicycled, hiked and played hard-to-beat rounds of board games such as backgammon and Scrabble. She also loved horses; she rode them whenever she could and always lamented that her parents never fulfilled her girlhood wish for a horse of her own. She rarely missed the Devon Horse Show. And she was ecstatic when her beloved Eagles won the Super Bowl. Political activism was an important part of Mrs. Hasbrouck’s life. She participated in many rallies to advocate women’s rights, stricter gun-control measures and get-out-the-vote initiatives for the Obama and Clinton campaigns. For many years she was a member and officer of the Cosmopolitan Club of Philadelphia. Fluent in Spanish, she loved Iberian culture and food, a legacy of the year she spent as a young woman pursuing language and cultural studies at the University of Madrid. A special interest of Mrs. Hasbrouck’s was classical music, especially music of the Baroque period and, above all, Bach and Haydn. She was a regular at Philadelphia Orchestra concerts. She enjoyed many other art forms, pursuing photography and painting, and writing essays and poetry for her own satisfaction. She graduated magnum cum laude from Arcadia University in 1994 after maintaining a 4.0 grade-point average. She was awarded the school’s Howard M. Wertman Prize in Sociology. A native of Bryn Mawr, she also is a graduate of the Shipley School in Bryn Mawr, Garrison Forest School in Owings Mills, MD, and Bennett College in Millbrook, NY. Surviving besides her husband are a brother, Andrew, of Bethlehem, CT; a daughter, Andrea, wife of James Woodward, of Arlington, VA, and their children Lily, Evan and Eliza; a son, Christopher Behr, and his wife, Heidy, of Cochabamba, Bolivia, and their children Felipe and Matias; and stepsons, David Hasbrouck of Havertown and Joshua Hasbrouck of Center Valley, PA. Her Memorial Service will be held on Sat. Oct. 27th. at 11 AM in Christ Church, 20 N American St, Philadelphia, PA 19106, with a reception to follow. Burial will be private. In lieu of flowers, please contribute to the Christ Church Preservation Trust.

The family of Marcy W. Hasbrouck created this Life Tributes page to make it easy to share your memories.

Send flowers to the Hasbrouck family.