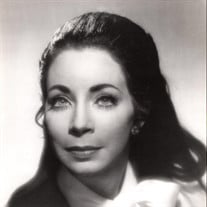 Margaret McGarry Hollinger “Meg”, of Cochranville, PA, formerly of Merion Station, PA, died peacefully on April 15th, 2022 after a long struggle with Parkinson's disease. She was the daughter of the late Anthony J. and Rose Cella McGarry and sister to Anthony and John. Meg, who wrote a book about her mother, a visionary and highly successful entrepreneur in the 1950s and 1960s, frequently stated that it would be difficult to imagine anyone who had a more magical childhood or fulfilling life, citing an extraordinary, loving family, and supportive friends, mentors, coaches, directors, colleagues – nourished in mind, body and spirit. Described as “the little girl with the big voice,” she found her earliest teacher/mentor in well known Philadelphia conductor Dr. Carl Suppa. Her first professional appearance was at the age of eight at the Academy of music, singing the role of the Page in Rigoletto, a Philadelphia Grand Opera Company production. A graduate of the Academy of Notre Dame de Namur in Villanova and the University of Pennsylvania where she was named “outstanding actress” four consecutive years and originated the role of Cathleen in Bruce Montgomery’s Spindrift, a musical based on Irish playwright John Millington Synge’s melancholy Riders to the Sea. She studied voice with Madame Euphemia Giannini Gregory and Martial Singher at The Curtis Institute of Music and became the protégé of Metropolitan Opera star Lois Hunt and Broadway’s Earl Wrightson, performing all over the world. In New York, she studied voice with Dr. Leon Carson and acting with Uta Hagen at The Herbert Berghof Studio. Her career included recital work, opera, commercials, hand, eye, and petite size modeling. She performed on stock, national company and off Broadway stages, most notably in the roles of The Girl in The Fantasticks and Lili in Carnival. Later, she and her husband owned CMAJAR Productions, a successful dinner theatre production company (touted by PBS) packaging shows at The Inn of the Four Falls, the Mendenhall Inn and the Valley Forge Sheraton. With motherhood, she turned her talents to not-for-profits, first initiating the development office at her alma mater The Academy of Notre Dame. Later she was VP for Development at the Philadelphia Drama Guild and Director of Development at The Episcopal Academy where she played an integral and pivotal role in both the procurement of and funding for the Newtown Square campus. In recognition of her many accomplishments, she was the recipient of the national alumni Distinguished Service Award. She took great delight in the many invitations she received from her beloved alumni to become an honorary member of their respective classes and was bemused by the fact that the first half of her professional life was spent on the receiving end of applause, the second applauding others. She maintained that she was in the business of making people happy – providing the opportunity to “give ‘til it felt good” in support of a worthy cause or institution. She was in that same “happiness business” indiscriminately – as a wife, mother, grandmother, friend, professional singer/actress, entrepreneur, writer and fundraiser – always elegant, creative and gracious with a passion that was focused and pure. After retirement, she consulted with many not-for-profits throughout the Delaware Valley. She is survived by her beloved husband Charles and was loving mother to sons Jason Sieber, Jonathan Hobart, and Joshua Heistand, admiring mother-in-law to Elizabeth, Victoria and Yu, and proud grandmother to Elason, Grant, Charlie, Kaje, Greta, and Olivia. The family will receive guests on Friday April 22nd from 11 AM to 1 PM in the Chadwick & McKinney Funeral Home, 30 E. Athens Ave. Ardmore, PA. Her Burial Service will be private. Her Memorial Service will be held on Saturday April 23rd at 11AM in The Class of 1944 Chapel at Episcopal Academy, 1785 Bishop White Drive, Newtown Square, PA 19073. In lieu of flowers, contributions may be made to the Meg and Chip Hollinger Scholarship Fund at The Episcopal Academy or to The Michael J. Fox Foundation.

Margaret McGarry Hollinger &#8220;Meg&#8221;, of Cochranville, PA, formerly of Merion Station, PA, died peacefully on April 15th, 2022 after a long struggle with Parkinson's disease. She was the daughter of the late Anthony J. and Rose Cella... View Obituary & Service Information

The family of Meg Hollinger created this Life Tributes page to make it easy to share your memories.

Send flowers to the Hollinger family.