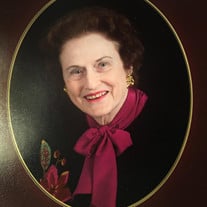 Margaret Wood Shuck (fondly known as “Woody”) passed away on September 17, 2016. She was born October 19, 1921, in Warrensburg, Missouri. She early on developed a love of music and singing, and was active as a teenager in her church choir. She received a scholarship to study music at Northwestern University, and became the first woman in her family to attend college. While at Northwestern, she was introduced to her future husband, John “Jack” Flory Shuck. They met on a blind date, while he was on leave from training in the US Army Air Corps. After a whirlwind courtship, they were married in June 1943 in Florence SC, where Jack was stationed. After the War, she and Jack began a journey together that would last 64 years. They remained an Air Force couple for over 30 years, with worldwide tours of duty together. They enjoyed eight early years together, as a couple in the Southwest. In 1953 and 1955 while in Sacramento, CA, their two children were born. Immediately, they began an assignment in Japan for several years, followed by years in Massachusetts, Florida and Washington DC. In 1966, Woody brought the family to the Middle East, to join her husband who was assigned as the Air Attache attached to the US Embassy in Damascus, Syria. While overseas on this tour, she and Jack made numerous trips to other Mideast and European destinations. Following this assignment she returned to Washington DC with her family for Jack’s final years in the military at the Pentagon. Wherever Woody found herself throughout these years, she continued to be active in music and singing. While in Japan she performed on several occasions as a vocalist with the Glenn Miller Orchestra entertaining the troops. While in the DC area, and with her children a bit grown, she returned to school and received a Masters Degree in Music and Music Education at the University of Maryland. She became a coed as her children were moving through high school, and throughout kept a warm and loving home, full of music. With Jack’s retirement from the military in 1972, they moved to New Canaan, Connecticut, as Jack took a job in Manhattan with Exxon Corporation. For the next 18 years, Woody was active as a realtor in New Canaan, as well as being involved with her church choir. In 1990, they moved to Devon PA to be closer to their children and grandchildren. Woody again practiced real estate and was very active in the St David’s Church choir, including traveling overseas for performances. She also was active as a life-long member of the PEO, and a supporter of the Musical Coterie of Wayne PA, the Philadelphia Orchestra, and Surrey Services. She enjoyed volunteering and singing and playing the piano for the residents of Devon Manor. After Jack’s passing in 2007 and due to health issues, she moved to Dover, DE in 2012, where her son and daughter-in-law reside. She is pre-deceased by her husband John F Shuck, and is survived by her children Constance V. Shuck of Devon, and John W Shuck MD (Gina) of Dover, and grandsons John William (Katherine) and Gregory Shuck (Natasha). Her funeral service will be held on Saturday September 24 at 11 AM in the Chapel of St David’s Episcopal Church, 763 Valley Forge Road, Wayne. Interment will follow in the Churchyard. In lieu of flowers, the family kindly suggests that contributions be made to either The Salvation Army, the Alzheimer’s Association, or St David’s Episcopal Church Choir.

The family of Margaret W. Shuck created this Life Tributes page to make it easy to share your memories.

Margaret Wood Shuck (fondly known as “Woody”) passed away on...

Send flowers to the Shuck family.