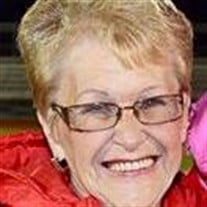 Marjorie E. Tomarelli of Ardmore, PA died peacefully on December 20th, 2016 surrounded by her family. Marjorie was a terrific mother and grandmother who was as brave in death as she was in life. She grew up mostly in Rhode Island but moved many times due to her father’s job as a master toolmaker who set up factories for the jewelry industry. She spent a few of her teen years in Montreal, Canada before they moved to Philadelphia, PA for her father’s job. There she met her husband, Carmen Tomarelli. They were married in June 1947 and a little over a year later had their first child, Robert. They moved shortly after to Rhode Island where Carmen (Bob), could pursue his career as a master toolmaker as well. In 1955 they moved back to the Philadelphia area, to Wynnewood and in 1958 had their second child, Louise. In 1963 they moved to Havertown where Marjorie lived the rest of her life. Marjorie started a career in the early 70’s at Bryn Mawr Hospital as an expeditor at the Blood Bank where she remained for 25 years until retirement at 64. Carmen passed away in 1982 and she remained a widow the rest of her life. She did volunteer work for the Sisters of the Holy Rosary until, at the age of 76, she became the business manager at the cemetery of St. Paul’s Church, Ardmore where she worked until she was 87. Marjorie loved to travel, she enjoyed trips to Europe, and especially liked Las Vegas. She attended everything her three grandchildren, April, Bob, and Stephen participated in and was well known at Haverford High School for being at every football game, no matter the weather, that her grandson Stephen played in. Just this past October she could be found dancing in front of the Skatium to grandson Bob’s band on Haverford Township Day. Marjorie loved her family, loved to play the slots and loved life. Her feisty spirit and dedication to service to her community will always be with her family as an inspiration on a life well lived.  She was the beloved wife of the late Carmen R. Tomarelli and devoted mother of Robert W. Tomarelli(Virginia R.) and Louise M. Pierce(Mark V.); also survived by her adoring grandchildren, April R. Tomarelli, Robert J. Tomarelli and Stephen M. Pierce. Her Memorial Service will be held on Friday January 6th at 11 AM in St. Paul's Lutheran Church, 415 E. Athens Ave., Ardmore, PA, where you are invited to visit with the family after 10 AM. Int. St. Denis Cemetery. In lieu of flowers, contributions may be made in her memory to the National Kidney Foundation, 30 East 33rd. Street, New York, NY 10016 (www.kidney.org)

Marjorie E. Tomarelli of Ardmore, PA died peacefully on December 20th, 2016 surrounded by her family. Marjorie was a terrific mother and grandmother who was as brave in death as she was in life. She grew up mostly in Rhode Island but moved... View Obituary & Service Information

The family of Marjorie E. Tomarelli created this Life Tributes page to make it easy to share your memories.

Send flowers to the Tomarelli family.