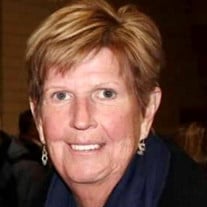 Mary McComb Hobart died on Sunday evening, December 12th, at Lankenau Medical Center with her son Bob by her side. Mary was born on July 25th,1943 in Washington, D.C., the daughter of a pediatrician and a psychiatrist. She attended the National Cathedral School, for which she maintained a lifelong fondness. Mary spent her summers playing tennis before traveling to Chicago for college. After graduating from Northwestern University, she moved to Philadelphia, raising Bob and his late brother, Michael, on her own while working in non-profit development notably at the Philadelphia Zoo, WHYY, and NJN. Always putting everyone else before herself, she was the biggest and most loyal fan on the sidelines of her sons’ games - The Ultimate Booster. After her boys graduated from college, Mary moved to work in Massachusetts, immersing herself in all things New England. She continued to work in development at CPTV and the National Association for Amateur Radio (ARRL). She became an enthusiastic gardener, an avid rower and a huge fan and fundraiser for UCONN Women's Basketball! In 2014, Mary retired and moved to Philadelphia to be closer to family. She was given the gift every grandparent dreams of: time to enjoy her grandchildren. Tricia and MaryCate were her pride and joy. They formed a special relationship as she watched them grow into accomplished young adults. Mary was an active member of St. George’s parish. In spite of medical difficulties that could have slowed her down, she worked tirelessly for the parish in a multitude of ways. She was unfailingly generous with her time, talent, and treasure in equal measure. Serving on the Vestry and becoming a beloved member of the parish family filled her life like no other community. “Living Faithfully and Giving Generously”, was her mantra. Mary was predeceased by her son Michael Markey of Goochland, VA, brother Harold Hobart of Washington, DC; and sister Nancy Hobart of Athens, GA. She is survived by her son, Bob Markey (Colleen) and her two granddaughters, Tricia and MaryCate. A Requiem Mass will be celebrated Saturday, January 8th at Saint George’s Episcopal Church, Ardmore. Visitors may call at 9am, followed by Mass at 10am and Interment in the church’s Memorial Garden. The Service will be livestreamed at www.facebook.com/StGeorgeArdmore In lieu of flowers, donations can be made to Saint George’s Church, 1 West Ardmore Ave, Ardmore, PA 19003

Mary McComb Hobart died on Sunday evening, December 12th, at Lankenau Medical Center with her son Bob by her side. Mary was born on July 25th,1943 in Washington, D.C., the daughter of a pediatrician and a psychiatrist. She attended the National... View Obituary & Service Information

The family of Mary McComb Hobart created this Life Tributes page to make it easy to share your memories.

Send flowers to the Hobart family.