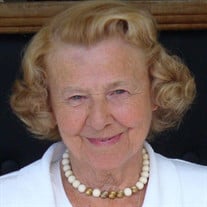 Mary Helen Moore Neuendorffer of Gladwyne passed away on June 23rd., 2021. She was 94 years old. Born in Philadelphia, she was the daughter of Robert Meredith Moore and Helen Peck Moore and granddaughter of Edgar Benjamin Moore. She was the loving wife of the late Richard Neuendorffer for 48 years and the late Sheldon Pfeifer for 10 years. She was the loving mother of Carolee Ziegenhagen (Robert) and Jean Wise Bubriski (Mark). She was predeceased by her daughter, Esther (Esty) Collet (Pierre). Mary Helen was the devoted grandmother of Susan King, Lynzi Ziegenhagen, Christophe Collet, Edouard Collet, and Caroline Collet Bellum. Also, she had two other grandchildren, Anne Moore Bubriski and Kathleen Peirce Bubriski, and 14 great-grandchildren. Mary Helen was a graduate of the former Stevens School in Germantown, and she attended Mount Holyoke College and Connecticut College. She also graduated from the New London, CT, Business College and the Grumman Data Systems Institute, Long Island, NY, with a degree in Accounting. She lived in New London and Stonington, Connecticut, in the 1950s and 1960s. She lived in Paris, France for two years and in Brussels, Belgium for one year while her husband was on international business for the General Dynamics Corporation. After Europe, they settled in Lloyd Harbor, Long Island, NY. She was a member of the Huntington Country Club and the Cold Spring Harbor Beach Club. She was a member of and the Treasurer for the Three Harbors Garden Club. She was a Board Member of the National Multiple Sclerosis Society of Suffolk County, NY. She was Assistant to the Finance Director of St. John’s Episcopal Church in Cold Spring Harbor, NY, where she was an active member. In 1996, she moved to Waverly Heights in Gladwyne, PA. She became a member of the Merion Cricket Club. In Gladwyne, she was a dedicated member of St. Christopher’s Episcopal Church. While at Waverly Heights, she wrote a novel, The Town and the Troublesome Strangers, about the town of her beloved summer home, Northfield, MA. She gifted copies of the novel to family and friends in Northfield, MA and Gladwyne, PA and copies of her novel are in the Waverly Heights Library and the Northfield Library. Relatives and friends are invited to her funeral on Tuesday June 29th., at 11 AM at St. Christopher’s Episcopal Church, 226 Righter Mill Road, Gladwyne, PA 19035, with a reception following. In lieu of flowers, memorial contributions can be made to St. Christopher’s Episcopal Church at the above address.

Mary Helen Moore Neuendorffer of Gladwyne passed away on June 23rd., 2021. She was 94 years old. Born in Philadelphia, she was the daughter of Robert Meredith Moore and Helen Peck Moore and granddaughter of Edgar Benjamin Moore. She was the... View Obituary & Service Information

The family of Mary Helen Moore Neuendorffer created this Life Tributes page to make it easy to share your memories.

Mary Helen Moore Neuendorffer of Gladwyne passed away on June...

Send flowers to the Neuendorffer family.