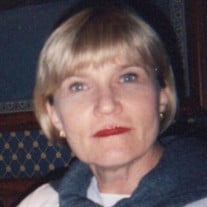 Maryanne Rita Gerbauckas, of Philadelphia, PA, died February 3, 2022 at Sunrise Senior Living, Haverford, PA at the age of 73. She was born September 29, 1948 in Brooklyn, NY, graduated from Christ the King High School, Queens, NY and St. John’s University, Jamaica, NY. Maryanne enjoyed Rotary, knitting, crocheting and horseback riding. She served 42 years with the National Park Service, and taught English as a second language in Ocean City, MD and Philadelphia, PA Maryanne’s career with the National Park Service began as a park ranger at the Statue of Liberty National Monument and Ellis Island. She progressed through assignments in both the protection and resource management fields at Acadia National Park in Maine, Fire Island National Seashore on Long Island, Assateague National Seashore in Maryland and Virginia, Colonial National Historical Park in Virginia, the National Park Service Northeast Region office in Philadelphia, and William Howard Taft National Historic Site in Cincinnati. She returned to the Northeast in 1992 when she took over as superintendent of Edison National Historic Site. In 2007 she was named the associate regional director for resources, stewardship and science for the Northeast Region. As resource management specialist at Fire Island National Seashore, she was responsible for dune restoration projects, earned the trust of communities adjacent to the parks, and became the community liaison for local cultural resource projects. She restored dunes using native plants that she had established in a nursery on the beach. Later, at Assateague Island National Seashore, Maryanne managed and enforced the public hunting program in the Maryland section of the park and monitored hunting activities at private retentions within park boundaries. She regulated the use of offroad vehicles at both Fire Island and Assateague Island National Seashores. At William Howard Tart National Historic Site in Cincinnati, Ohio, she worked closely with the primarily African American Cincinnati community of Mt. Auburn, and was invited to serve on the boards of the Mr. Auburn Community Council and the local community center. Under her leadership at Edison National Historic Site, the park worked with the National Trust for Historic Preservation to place the site on their annual “endangered” list. During her tenure, the site’s friends group raised $1million and secured a $300,000 grant for West Orange Main Street beautification and $400,000 from the sale of an Edison commemorative coin for preservation of the site’s vast museum collection. In partnership with the Edison Innovation Foundation, she leveraged $2.5 million of federal funds into a $12 million multi-phase project that rehabilitated Edison’s historic structures, conserved and preserved the artifacts, improved accessibility, created open curatorial storage and new interpretive media. A total of $5 million of this funding came from General Electric and was one of the original gives in the first year of the Save America’s Treasures program. She and the staff at Edison also worked with the Olmstead Center for Landscape Preservation to establish historic plant inventories, and establish and nurture specimen plants at the Arnold Arboretum of Harvard University. Maryanne retired from the National Park Service on February 27, 2015. A Memorial Service is being planned for a later date. She is survived by her sister, Diana Gerbauckas Memorial contributions – Happy Trails Farm Animal Sanctuary, www.happytrailsfarm.org or McPaws no kill shelter located in McCall, ID

The family of Maryanne Rita Gerbauckas created this Life Tributes page to make it easy to share your memories.