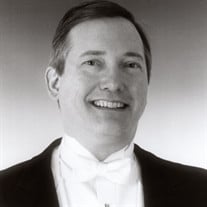 Michael Stairs died peacefully at home on Saturday August 11th, 2018. He was the consummate musician and teacher. He inspired scores of students during his twenty-five years at the Haverford School and prior to that at the University of the Arts. He is also remembered by many as the long-time organist for the Philadelphia Orchestra, earning the respect of some of the finest conductors in the world. Stairs is equally known as an eminent and revered church musician, serving as director of music at the Church of the Redeemer in Bryn Mawr for over twenty-five years. He also worked with countless other churches, synagogues, schools and other Philadelphia area musical and choral groups. Other artistic pursuits include many years assisting at the famed Wanamaker Organ at Macy’s, Philadelphia, as well as performing and recording at Longwood Gardens, Girard College and other venues throughout the city, the United States, and internationally. Michael Stairs also served on many advisory and administrative boards of musical and performing arts organizations, being known for his wisdom and keen insight in helping these groups further the arts in Philadelphia and beyond. Michael's gentle and loving personality earned the respect and admiration of friends, students, congregations and audiences. His humility and grace inspired all who crossed his path. His enormous talent and his quick sense of humor endeared him to everyone. Requiescat in pace, dear friend. He is survived by his wife, Margaret Connell; stepson, William Adams; sister, Beth Zaccaro; aunt, Joan Bishop; several cousins, nieces and nephews and was predeceased by his brother, Peter Stairs. His Funeral Service will be held on Saturday September 8th at 11 AM in Church of the Redeemer, 230 Pennswood Rd., Bryn Mawr, PA 19010. A reception will follow. In lieu of flowers, contributions may be made in memory of Michael Stairs to Wanamaker Organ Restoration Project, Attn: Friends of the Wanamaker Organ, 630 Hidden Valley Rd., King of Prussia, PA 19406-1712

Michael Stairs died peacefully at home on Saturday August 11th, 2018. He was the consummate musician and teacher. He inspired scores of students during his twenty-five years at the Haverford School and prior to that at the University of the... View Obituary & Service Information

The family of Michael Ondon Stairs created this Life Tributes page to make it easy to share your memories.

Send flowers to the Stairs family.