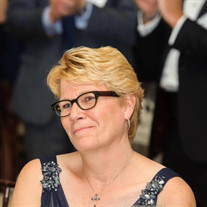 A Story of Michelle&#8217;s Life, by Christina Crippen Brown This is a summary of the story of my mother Michelle Buzby Crippen &#8211; beloved daughter, wife, mother, and friend. I cannot do justice to the wonder of Michelle&#8217;s life, and... View Obituary & Service Information

The family of Michelle Crippen created this Life Tributes page to make it easy to share your memories.

A Story of Michelle’s Life, by Christina Crippen Brown
This is...

Send flowers to the Crippen family.