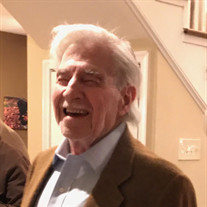 Myron Buzby, 1927 - 2018, Philadelphia, Pa. — Myron “Buz” Buzby, World War II veteran and mechanical estimator, died on Thursday, March 15, 2018. He was 91 years old. Buz, as his friends called him, grew up in the Olney neighborhood of Philadelphia. Born to Jason and Marian Buzby, he followed his father’s trade as a plumber. However, with World War II drawing to a close, the 17-year old teenager was anxious to get into the fight. In January of 1945 and with his parents’ permission, Buz dropped out of high school and enlisted in the U.S. Navy to fight the Nazis. After completing basic training in the Finger Lakes of New York, Buz was assigned to Navy aviation in Norfolk, Virginia as machine gunner on the crew of a submarine search plane, the PBY Catalina flying-boat. For his service he was awarded the American Theater Ribbon and Victory Medal. When the war ended he was discharged as a Seaman First Class. Returning home to Philadelphia, Buz completed his high school, and started working as a plumber. A young waitress, the lovely Kathleen Lockhart caught his eye and heart. They were married six weeks later on October 29, 1949. In the early days of their marriage, Buz worked for Bell Telephone Company by day and studied at the Drexel Institute of Technology at night. Later certified as a Master Plumber, Buz began a career in the contracting and construction business. Early on, he resolved to move into the field of mechanical estimating. During the Cold War, he used these skills in the service of his country as a defense contractor, building Nike Hercules missile sites around Washington, D.C. Desiring a larger home with some green space for his growing family of four children and a dog, Buz and Kathy moved to the Philadelphia suburbs, and eventually settled in the charming Victorian-era village of Wycombe, Bucks County. As the principal of M.K. Buzby and Associates, Buz used his extensive construction knowledge and technical engineering skills to restore an old farmhouse, creating an idyllic farmette retreat for his family within walking distance of the village’s church where they were actively involved. In the late 1970s and with all but one of their children grown and out of the house, Buz and Kathy sought a more rural and quiet life in the endless mountains of Tioga County, Pennsylvania. Buying another farmette and restoring its farmhouse, Buz pursued his avocations of bow-hunting and vegetable gardening while working with the Army Corps of Engineers in building the Tioga-Hammond Dam. Upon completion of the flood control project, Buz ended his professional career as a mechanical estimator with over a decade of service at Cornell University in Ithaca, New York, retiring in 1995. Active in retirement, Buz continued his restoration of the Tioga County farmhouse. In 2006, a massive heart-attack forced some life-style changes, and Buz and Kathy sold their farmette and moved to Colorado Springs, Colorado to live with their daughter, Michelle, and her family. Buz enjoyed the scenic beauty and natural wonder of the Rocky Mountain region. During his life on the Front Range, Buz was actively involved with St. George’s Anglican Church. He and Kathy traveled throughout the Rocky Mountain region, to Sante Fe, the Grand Canyon, Phoenix, and to British Isles. In 2008, Buz was diagnosed with Chronic Obstructive Pulmonary Disease (COPD), and he struggled to adjust to limitations he had never before experienced. When the family moved to Philadelphia in 2011, Buz experienced a return home and a reunion with family and friends of many years. He continued to remain active, including involvement with Christ Church Anglican on the Main Line in Wayne, Pennsylvania, and even driving his car until he was 89 years old. The degenerative effects of COPD severely limited Buz’s activity during the last 18 months of his life, even so, just five days before he died, he was at home joyously dancing (albeit assisted by a walker) with his grandchildren. Buz passed from this life to the next one on Thursday afternoon, March 15, 2018. He is survived by his wife of 68 years, Kathleen Lockhart Buzby; son Robin J. Buzby and daughter-in-law Nancy Buzby; daughter Melanye Buzby Winterbottom; daughter Michelle Buzby Crippen and son-in-law the Rev. Alan R. Crippen II; son-in-law Lawrence Whittle, widower of the late Karen Buzby Whittle; 17 grandchildren, and 14 great-grandchildren. With every hope and confidence in the resurrection of the dead to life after death, Myron Buzby, mechanical estimator in this life, is commended, to the continuing service of his Lord and Savior, the Great Architect, Builder, and Maker. In the new world coming there must be meaningful work in helping to build that great city, the New Jerusalem. Certainly, such a beautiful city will need water mains. “For Abraham was waiting for the city which God has designed and built, the city with permanent foundations.” Hebrews 11:10 GNT “Then I saw a new heaven and a new earth. The first heaven and the first earth disappeared, and the sea vanished. And I saw the Holy City, the new Jerusalem, coming down out of heaven from God, prepared and ready, like a bride dressed to meet her husband. I heard a loud voice speaking from the throne: ‘Now God’s home is with people! He will live with them, and they shall be his people. God himself will be with them, and he will be their God. He will wipe away all tears from there eyes. There will be no more death, no more grief or crying or pain. The old things have disappeared.’” Revelation 21:1-4 GNT Requiescat in pace, Myron Buzby. The burial office for Myron Buzby will be read at All Saints — Wynnewood, 1325 Montgomery Avenue, Wynnewood, Pennsylvania on Thursday, March 22 at 11:00 a.m. Graveside service and internment will be the following day, Friday, March 23 at 9:00 a.m. at Washington’s Crossing National Cemetery, 830 Highland Road, Newtown, Pennsylvania.

The family of Myron Buzby created this Life Tributes page to make it easy to share your memories.

Send flowers to the Buzby family.