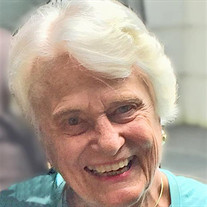 Ann “Nancy” Boyd Hastings died at age 88 on November 25th. She was surrounded by family, including her husband, David Hastings, her sons, David Jr., John and Peter, and her two daughters-in-law, Mary and Margo. She is also survived by eleven grandchildren and two great-grandchildren, her sister Margaret “Peggy” Rhodes, and brother George Boyd. Born in Philadelphia to George Boyd and Margaret Hamilton Boyd, she grew up in Plymouth Meeting, PA, and attended the Springside School. She was a leader in school activities and sports, was class president, was awarded the “Springside Bracelet” the highest award for top all-around achievement, and more importantly, made many life-long friends. After attending Dickinson College, she worked for the Curtis Publishing Company in downtown Philadelphia. She met her husband-to-be, David Hastings, on a blind date and got engaged six month later. They were married in 1955. They lived briefly in Schenectady, New York before returning to the Main Line, raising her three boys in Wynnewood, Haverford, and later moving to Bryn Mawr. Nancy worked as a volunteer tour guide at the University of Pennsylvania Museum (now the Penn museum), specializing in Ancient Egypt, and then worked as the Head of the Education Department. In this capacity she brought her joy and curiosity to a variety of school programs and outreach and also appeared several times on the local children’s television show, “Captain Noah.” She volunteered with the Center for International Visitors and her church. Ever curious to the world at large she later started her own travel company, Hastings Tours, scouting, organizing and leading small group tours around the world into her seventies. Through her network of international friends, she was able to take her travelers to private estates, out-of-the way gems, and places generally not open to the public. She traveled to over thirty countries in Central and South America, Asia, the Middle East, and Europe. Longtime members of the Church of the Redeemer in Bryn Mawr, Nancy and David sang in the choir for years. She had her regular tennis group for decades, and a strong and loyal group of friends, many of whom she’d known her whole life. But above her many accomplishments was her big heart and beaming smile. When she came into the room, things got better. She was curious, caring, and full of joy and wonder. She had a tremendous sense of humor and loved to laugh (in fact she’s probably disappointed that we haven’t inserted any jokes here). She cared deeply for her children, all her family, her friends, and her succession of cats, who had various names but tended to go by “Mr. Pussycat.” She will be missed. A memorial service will be held at the Church of the Redeemer, Bryn Mawr, on Saturday, December twenty-eighth, at 11am. In lieu of flowers, donations may be made in Nancy’s name to The Penn Museum or The Church of the Redeemer.

Ann &#8220;Nancy&#8221; Boyd Hastings died at age 88 on November 25th. She was surrounded by family, including her husband, David Hastings, her sons, David Jr., John and Peter, and her two daughters-in-law, Mary and Margo. She is also survived... View Obituary & Service Information

The family of Nancy Hastings created this Life Tributes page to make it easy to share your memories.

Send flowers to the Hastings family.