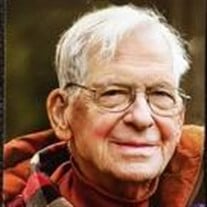 Ned Samuel Kelchner of Hellertown and Lower Saucon, passed away on December 20, 2017. He was born in Bethlehem on November 8, 1922, the last surviving of 9 children of the late Harley Benjamin Kelchner, engineer at the Bethlehem Steel Company, and Eva Ebner Kelchner. His beloved Ruth, to whom he was married 72 years, predeceased him in 2014. Upon graduation from Hellertown High School he entered the machinist apprentice program at the Bethlehem Steel. He received his draft notice just after the birth of his first child John and joined the Navy, and was eventually deployed in the occupation force in Japan. He finished his Steel apprenticeship upon honorable discharge in 1946, and was an asset to the company as a dedicated and accomplished machinist and foreman, and from which he retired in 1980. He was a Mason and Past Master of Lodge 283. He was a charter member and golfed at Silver Creek Country Club, formerly the Bethlehem Steel Club, until 2014. Ruth and Ned were members of Christ Reformed Church in Bethlehem. Ned is survived by his son John Charles Kelchner, his daughter Cynthia Kelchner Sinclair, grandsons John B. and Matt B. Kelchner, granddaughters Andrea Sinclair and Christina (Sinclair) Brigdon, and great-grandchildren Elizabeth and Katharine Kelchner, and Izabella, Baxter, and Phoebe Kelchner, and Henry Brigdon. Ned was able to enjoy Christmas visits from family and friends the day before he passed. His ashes will be interred privately in Union Cemetery in Hellertown to rest with those of Ruth. The family is planning a memorial celebration of his life later in spring, for family and friends. Any donations can be made to and would be appreciated by the Rosemont Friendship Fund. Dad was well liked by many, especially in his retirement years when he gave so much to others by his ingenuity and masterful skill in machine work and woodworking, which included making parts for obsolete and antique machinery, sometimes even rescuing a local business by being readily available to repair or remake a broken part. He helped thus with restoration of some museum pieces, and managed to convert the machinery of a three sided clock from a New York tower to the present four faces of the clock project created by Joseph Delfoe in Detweiler Plaza in Hellertown. He made and repaired things for friends and family, often making Christmas ornaments in multiples to give. He repaired and restored for the church and for the country club, and Christmas was never complete until he had created gifts for his family. He built much onto his first house in Hellertown, and made all the finishing and cabinetry in his final home in Lower Saucon, as well as making improvements in his children’s homes. Ned made so much, but more than anything, he made friends. Even in his last year, when he could no longer live in his beloved home, he made Rosemont his home, and the people there his friends. They loved him, too, his kindness, his appreciation, his humor, the sparkle in his eyes. We will miss him.

Ned Samuel Kelchner of Hellertown and Lower Saucon, passed away on December 20, 2017. He was born in Bethlehem on November 8, 1922, the last surviving of 9 children of the late Harley Benjamin Kelchner, engineer at the Bethlehem Steel Company,... View Obituary & Service Information

The family of Ned Samuel Kelchner created this Life Tributes page to make it easy to share your memories.

Ned Samuel Kelchner of Hellertown and Lower Saucon, passed away...

Send flowers to the Kelchner family.