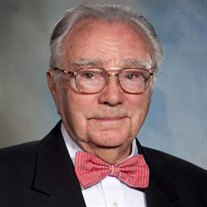 H. Newton Spencer, MD, 92, died in the comfort of his home on Friday, November 3, 2017. His Funeral Service will be held at Ardmore Presbyterian Church on Saturday, December 2, at 11 am, where the family will receive guests after 10 am in the Sanctuary. Dr. Spencer was born on December 20, 1924 in Red Bank, NJ, and graduated from Scotch Plains High School. He earned a Bachelor of Science degree from Davidson College, NC in 1945 and a medical degree from the University of Pennsylvania in 1950. After completing an internship at The Presbyterian Hospital of Philadelphia in 1951, he returned to North Carolina as Medical Director at Cannon Mills in Kannapolis, beginning an interest in Occupational Medicine. In 1953, Dr. Spencer served in the Air Force as a flight surgeon during the Korean War that led to an interest in orthopedic surgery. After completing his military service, he was accepted as an orthopedic surgery resident at the Hospital of the University of Pennsylvania in 1955. Dr. Spencer was active in both orthopedic surgery and occupational medicine. He held medical licenses in Pennsylvania, New Jersey and North Carolina. As an orthopedic surgeon, he worked at The Haverford Hospital, The Presbyterian Hospital of Philadelphia, Springfield Hospital and Hahnemann University Hospital. After earning a certificate from Harvard University Graduate School of Business Administration in Health Systems Management in 1973, he remained active in occupational medicine and developed a fully operational network of clinics serving employers though out the region. Dr. Spencer’s love of medicine also infused his charitable work. He volunteered for several medical mission trips to Haiti in the 1960s. He also served as the doctor for the Haverford Senior High football teams in the 1970s. Dr. Spencer was an active member of Ardmore Presbyterian Church for over 60 years, where he served as deacon, trustee and elder. He was also involved in other community organizations including the Rotary Club of Havertown, where he was a former president, the Rotary Club of Ardmore and the Union League of Philadelphia, where he was a proud member for 57 years. Dr. Spencer is survived by his wife of 68 years, Mary Johnston Spencer, MD. He was the devoted father of four children: Daniel (Donna), Mary Anne Blair (the late Christopher), Patricia Turner (Richard), and the late Currie Gavin, and loving grandfather to: Christine and Jennifer Spencer, Laurel Blair, MD (Thomas Adams), Elizabeth Blair, PharmD (Haynes Dallas), Mary Katherine, Spencer and the late Alexander Gavin, Lara Stuckey (John), James and Katherine Turner. Memorial contributions may be made in his memory to Ardmore Presbyterian Church, 5 W. Montgomery Ave., Ardmore, PA 19003

H. Newton Spencer, MD, 92, died in the comfort of his home on Friday, November 3, 2017. His Funeral Service will be held at Ardmore Presbyterian Church on Saturday, December 2, at 11 am, where the family will receive guests after 10 am in... View Obituary & Service Information

The family of Newton Spencer MD created this Life Tributes page to make it easy to share your memories.

Send flowers to the Spencer family.