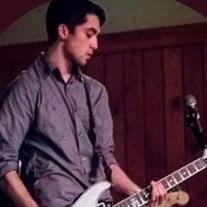 Nik Rajagopal (Nikhil Subrahmanyam Henry Rajagopal) of Philadelphia, Wynnewood and Drexel Hill died suddenly on February 2, 2021 at his mother’s home in Drexel Hill Pennsylvania. Nik was born on September 17, 1996 in Bryn Mawr, Pennsylvania. His mother is The Rev. Dr. Doris Rajagopal and his father, S. (Gopal) Rajagopal. Nik’s maternal grandparents were Henry and Doris Hunt of Philadelphia, PA. His paternal grandparents were Kanakam Subrahmanyam and the world-renowned Carnatic music singer T. R. Subhrahmanyam (aka TRS) who was also a retired professor of Music, Delhi University. Nikhil graduated from Lower Merion High School. He attended Drexel University for two years, where he created his own major, including Japanese, Chinese and Korean languages and cultures. In 2021, Nik was enrolled at Temple University- preparing to complete his degree. Nik was a talented musician. He played guitar, bass, piano and drums and was gifted with a beautiful voice. He was recognized with awards for his classical piano skills at a young age. Nik was also a talented composer. One of Nik’s bands, 13 Lines, was recognized by the National Liberty Museum for their volunteer performances for a number of charities. They also recorded and released a CD of original music while in high school under the Lower Merion High School Record Label. Nik composed and recorded numerous CD’s in his short lifetime. Nik also earned a Black Belt in Shotokan karate and participated in a competitive events nationally, earning many awards. Nik was also a Latin scholar, being recognized throughout high school for his stellar performance in the National Exams. Nikhil Rajagopal was also a compassionate and giving person. He volunteered to help people who were struggling. Even while he was very young he accompanied his mother in her work with women who were working to improve their lives while living in group housing. He continued using his musical skills to raise money for various charities. In addition, he and his friends raised money to feed people in need and build community gardens so they could grow their own food. He was also a dedicated supporter (and protestor) for all Black Lives Matter and human rights causes. He believed in the right of every human being to live a life of dignity. Nikhil S.H. Rajagopal is survived by his mother Doris, his father Gopal, and his brother Sampath. He is also survived by aunts and uncles (Henry, Tina, Jacqueline, Tim, Vijaya, Narayanan), and numerous cousins. His memorial will take place at St. John’s Episcopal Church in Bala Cynwyd on February 20, 2021 but it is private because of restrictions in social gathering due to Covid-19. Burial will be private at Palmer Cemetery later this year. Nik’s mother will be creating the Nik Rajagopal Memorial fund to benefit artists who are struggling with mental health and addiction. You may attend in Nik's Service virtually by joining via Zoom: Zoom meeting. Topic: Nik Rajagopal Memorial Service Time: Feb 20, 2021 11:00 AM Eastern Time (US and Canada) Join Zoom Meeting https://us02web.zoom.us/j/85653848832 Meeting ID: 856 5384 8832 One tap mobile +16465588656,,85653848832# US (New York) +13017158592,,85653848832# US (Washington DC) Dial by your location +1 646 558 8656 US (New York) +1 301 715 8592 US (Washington DC) +1 312 626 6799 US (Chicago) +1 253 215 8782 US (Tacoma) +1 346 248 7799 US (Houston) +1 669 900 9128 US (San Jose) Meeting ID: 856 5384 8832 Find your local number: https://us02web.zoom.us/u/k6OsPr8O

The family of Nik Rajagopal created this Life Tributes page to make it easy to share your memories.

Send flowers to the Rajagopal family.