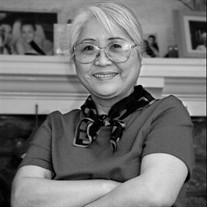 Noriko Thompson passed away on Sunday, October 22. Family and friends call her Riko. She was first and foremost, a brilliant, loving and fun person. Riko was an accomplished fine artist in her youth, both in Japan and the US, graduated by the Pennsylvania Academy of the Fine Arts. She paused her career to raise her two boys, Seiji and Joji. As the boys became young men, she began a twenty-year career teaching Japanese, starting as an adjunct professor at St. Joseph University and Drexel University. Later, she taught at Main Line School Night for several years before conducting private classes. Riko kept her Japanese culture throughout her life and instilled it into her sons. She was quite proud of her heritage and taught her grandchildren too in the fun ways of Japanese life. She was always good for a gohobi (treat) – kids knew there would be a surprise in her apron pockets. Riko loved adventure and trips. Because of her physical limitations from several auto accidents, she traveled by car, though she did visit Spain and England with her family, and of course, returned to Japan many times. Every trip had a picnic basket with her in the car, because Riko was a master with all kinds of foods, from snacks to simple gourmet inventions of her own. Most notable, was her facility with a paring knife. Riko was always shaping an apple, carrot or radish. She seemed to bring the Japanese ritual of flower arranging to the way she presented the food she prepared – always balanced, always delightful. Most of all, Riko was a reliable advisor and excellent judge of character and accomplishments. She had an unusual perspective that helped people through problems or challenges. Her art, the things she crafted, her students, and the people she befriended benefited from her unusual gifts. In the end, her self-sacrifice and concern for others before herself, helped lead to her affliction. She bore discomfort for several years without telling anyone. She bore pain in her final days, so she could pass quickly when her troubles finally became unbearable. Born in Amagasaki, Japan, on September 8, 1943, the last of four children from Morisuke Asakura (née Shigeji Asakura) and Sachiko (née Mitsu Arita), Riko leaves her husband of 42 years, Thomas A., and a growing family. Her sons Seiji and Joji are both married (Janet and Melissa) and gave her grandchildren. Seiji and Janet have two boys, Jack and Oliver. Joji and Melissa have son Jude and twins Kai and Charlotte. One more child is on the way due in December. Riko is also survived by the wife of her deceased brother Dr. Toshio Asakura, Sumiko, and daughter Emi, living in Philadelphia, and son Kenji. In Japan, she is survived by two nephews by her deceased sister Hayako, named Kazuo and Kinya. And a sister-in-law by her deceased brother Mikio, named Tsugiyo (née Satoko), and her two daughters Kana and Yuka. Special thanks to the healthcare workers who helped Riko through this passage, especially hospice nurse Barb Kramer from Main Line Health Hospice Care. Condolences can be made through the Chadwick and McKinney Funeral Home or to the family. A celebration service will begin with a luncheon on Thursday, October 26, at the Merion Tribute House, 625 Hazelhurst Ave., Merion, PA 19066 beginning at 12 pm. Stories and comments by her husband and sons will follow around 12:45 pm. Riko was a great, great person. She we always be alive in our memories.

Noriko Thompson passed away on Sunday, October 22. Family and friends call her Riko. She was first and foremost, a brilliant, loving and fun person. Riko was an accomplished fine artist in her youth, both in Japan and the US, graduated by... View Obituary & Service Information

The family of Noriko Asakura Thompson created this Life Tributes page to make it easy to share your memories.

Noriko Thompson passed away on Sunday, October 22. Family and...

Send flowers to the Thompson family.